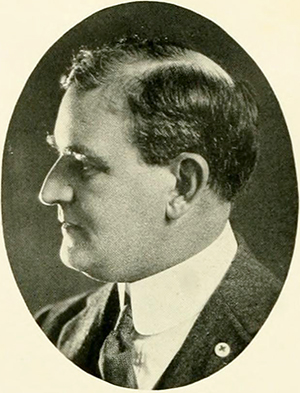 George Howe, teacher and administrator, was born in Wilmington, the son of George and Annie Josephine Wilson Howe. His father was a distinguished clergyman, and his uncle was the late president Woodrow Wilson, with whom Howe lived during his boyhood. From Lawrenceville School in New Jersey, Howe enrolled at Princeton University and in 1897 received the A.B. degree, with membership in Phi Beta Kappa and the Zeta Psi social fraternity. After studying at Oxford University in England, he was sent by Woodrow Wilson to the University of Halle, Germany, where he received the A.M. and Ph.D. degrees in 1903. In the latter year he was elected by the trustees to the faculty of The University of North Carolina as a professor of the Latin language and literature. Except for a leave of absence in 1912–13 to study at the American Classical School in Rome, Howe remained at the university for thirty-three years under the administrations of presidents Venable, Edward K. Graham, and Harry W. Chase.

In September 1919, Howe, then head of the Classics Department, was appointed dean of the College of Liberal Arts, a post he held until 1922. As dean, Howe separated the instructional and disciplinary functions of that office, devoting himself to the improvement of undergraduate studies and assigning the direction of extracurricular affairs (including discipline) to Frank Porter Graham in the new position of dean of student affairs. Also valuable to his office were Howe's experience with undergraduate tutorials at Princeton, his administrative expertise as faculty committeeman and head of a major academic department, and his personal standards for scholarship.

His participation in programs for university development included service on numerous committees. Among these boards were E. K. Graham's Committee on Grounds and Buildings, appointed on 6 Sept. 1913; the Curriculum Committee, which met in July 1918 to define the university's role in World War I by designing a program of American ideals implemented by the Student Army Training Corps; Chase's committee to set criteria for Kenan professorships (1919); and the Administrative Council of the Consolidated University (1933). During World War I Howe, a Democrat, was a member of the North Carolina State Council of Defense (1917–18).

Howe earned his reputation as one of the most prominent classical scholars in the South through authorship of several well-known Latin texts (including The Spirit of the Classics) and through activity in professional societies such as the American Philological Association, the Classical Association of the Middle West and South (first president of the southern section), the American Association of University Professors, and the North Carolina Literary and Historical Association. He was an associate editor of Studies in Philology and Classical Journal. A bibliography of his work was compiled by Albert Irving Suskin in 1936. Howe was also a member of the board of directors of the Bank of Chapel Hill. He left the university in May 1936 because of declining health.

On 27 Oct. 1903 Howe married Margaret S. Flinn, of South Carolina, the daughter of the Reverend William Flinn, a Presbyterian chaplain and dean of the University of South Carolina. In 1934 Howe traveled to Arkansas and sued for divorce in Little Rock. He then married Mrs. Ethel Eason, with whom he lived in Richmond, Va., until his death. When Howe's first wife contested his will, the Virginia Supreme Court in 1942 declared his second marriage void. The library of George Howe, including rare classical volumes given to him by President Wilson, was presented to the library of The University of North Carolina as a memorial to Howe by Margaret Flinn Howe in 1945.

Kemp P. Battle, History of the University of North Carolina (1912).

Register of the Officers and Faculty of the University of North Carolina, 1795–1945 .