Mary Anna Morrison Jackson, wife of "Stonewall" Jackson and author, was the daughter of the Reverend Robert Hall Morrison and his wife Mary Graham, a daughter of General Joseph Graham of "Vesuvius 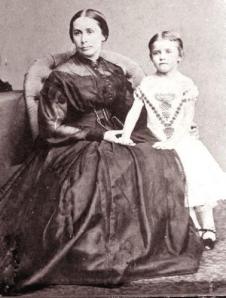 Furnace" in Lincoln County. At the time of Anna's birth, her father was pastor of Sugaw Creek Presbyterian Church in Mecklenburg County; she was born in the manse (since destroyed) three miles from the center of Charlotte. Shortly afterwards her father became the first president of Davidson College, and, according to Anna's sister, "most of her happy childhood" was spent at Davidson, where the original Presidents' House is still in use, though much enlarged. Anna was educated at Salem Academy (1847–49); in 1914, as the most famous of its alumnae, she was awarded a diploma by Salem College. When her uncle, William A. Graham, was secretary of the navy in the administration of President Millard Fillmore, Anna visited him in the nation's capital. Through her sister Isabella, who was married to Major D. H. Hill of the faculty of Washington College (later Washington and Lee University) in Lexington, Va., she met her future husband, Major Thomas Jonathan Jackson of the faculty of the Virginia Military Institute, also in Lexington.

On 16 July 1857 Anna and Tom Jackson were married at Cottage Home, in Lincoln County, the Catawba River plantation of her father after his retirement from Davidson. She was Jackson's second wife; his first wife had died childless. A few days after their marriage, the couple set on for a northern tour which included Richmond, Baltimore, New York, Saratoga, and Niagara Falls.

The Jacksons were deeply religious and devoted to one another. Their happy home life in Lexington was marred only by the death of their first child, Mary Graham, who lived only a few weeks. When the call to arms was issued for the Confederacy, the cadets at Virginia Military Institute offered their services and Major Jackson was chosen to lead them. Anna Jackson returned to Charlotte to live with relatives. In the home of her sister, Mrs. James Irwin, her daughter Julia was born on 23 Nov. 1862, her only child to survive infancy. Anna remained in Charlotte, although making several trips to see General Jackson, until she received the news of his tragic wounding by his own men. She was at his bedside when he died on 10 May 1863.

It is said that at first Anna did not approve of the nickname "Stonewall," as she did not think it appropriate to Jackson's personality and sensitive nature; however, she later accepted it as a badge of honor. In 1911, she objected strenuously to what she considered a caricature of her husband in Mary Johnston's novel, The Long Roll.

From the time of her husband's death until about 1873, Anna lived with her father at Cottage Home. She then moved to Charlotte to provide better educational advantages for her daughter Julia; she remained in that city for the rest of her life, living on West Trade Street at two different residences (now both destroyed). Her interests centered chiefly around the First Presbyterian Church, where her pew is now marked; the Stonewall Jackson Chapter of the United Daughters of the Confederacy; and the Mecklenburg Chapter of the Daughters of the American Revolution. When she attended a meeting of the latter organization in Washington, D.C., she was asked by President and Mrs. McKinley to receive with them.

Anna Jackson wrote several books. The first, Life and Letters of General Thomas J. Jackson , was published by Harper and Brothers in 1892. It was republished, with additions, in 1895 as Memoirs of Stonewall Jackson by His Widow (Louisville, Ky.). In 1910, the Stone and Barringer Company of Charlotte published her Julia Jackson Christian, Daughter of Stonewall Jackson . Julia Jackson had married William Edmund Christian on 2 June 1885, borne him a daughter and a son, and died on 30 Aug. 1889 at age twenty-seven. In 1882 Mrs. Jackson had begun a family history, entitled "Memory's Mirror," giving considerable detail about the families of her husband, her father, her grandfather (General Joseph Graham), and her great-grandfather (Major John Davidson of Rural Hill), but this memoir was never completed or published.

Jackson's widow was much honored in North Carolina and throughout the former Confederate states. After the death of Mrs. Jefferson Davis in 1906, Mrs. Jackson was recognized nationwide as "The First Lady of the South." The "tiny, brown-eyed lady" was the idol of Confederate veterans, many of whom came from all over the South to pay their respects to her and to her husband's memory. She literally lived her legend in her own day. Anna Jackson died in Charlotte at age eighty-three. She was accorded military honors at her funeral, and her body was taken to Lexington for burial beside her world-renowned husband.

My maternal uncle has traced

My maternal uncle has traced our ancestry to General Jackson. My great grandmother was named Sara Elizabeth Jackson, she married an Irishman, Albert Sydney O'Neal from Dublin, Ireland!
I'm not sure how we fit on the family tree,but it is SO cool to be related to such an honorable man!!

As President of the Mary Anna

As President of the Mary Anna Morrison Jackson chapter, Charlotte, which is connected with the Sons of Confederate Veterans Stonewall Jackson Camp here, i would welcome you to visit us & our Confederate Memorial Day at Dteele Creek Presbyterian Church in May. More info text me (980)228-6195. Camp meets 2nd Thurs of month 7pm Amer Leg. Mt Holly Rd.

Thanks Chalmer for this

Thanks Chalmer for this biography

If I'm not mistaken, Julia

I also need to be corrected,

I also need to be corrected, "children " is misspelled. Sorry.

Thanks for the correction! We

Thanks for the correction! The article has now been updated.