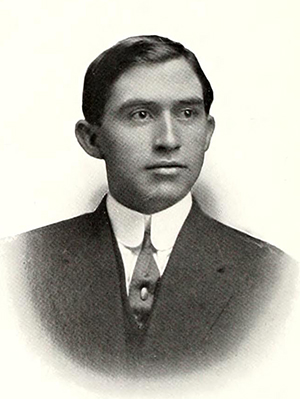 Gerald White Johnson, writer and newspaperman, was born in the community of Riverton in Scotland County, the son of Archibald and Flora Caroline McNeill Johnson. He received the A.B. degree from Wake Forest College and later studied at the University of Toulouse, France. A veteran of World War I, Johnson served with the 321st Infantry, 81st Division, U.S. Army (1917–19) and with the American Expeditionary Force, France, for one year.

His career in journalism began when, at age twenty, Johnson, with others, established the Thomasville Davidsonian ; he soon moved to a position on the Lexington Dispatch, where he worked from 1911 to 1913. Joining the staff of the Greensboro Daily News, he wrote editorials and music criticism until 1924, when he became a professor of journalism at The University of North Carolina. During his tenure on the university faculty, he helped President Harry Woodburn Chase in a successful campaign to fight antievolution bills in the General Assembly.

Johnson's journalistic career was climaxed by his affiliation with the Baltimore Evening Sun from 1926 to 1939, and Baltimore Sun from 1939 to 1943. As an editorial writer and columnist for the "Sunpapers," he was often called "Baltimore's second sage," a reference linking him with H. L. Mencken who was known as the sage of Baltimore. The two men remained friends through the years although their philosophies differed. In an obituary of Johnson, published in the New York Times on 24 Mar. 1980, Mencken was described as "cynical, pessimistic, racist and contemptuous of the 'booboisie,' " whereas Johnson was "patriotic, optimistic, a humanist and a liberal." Johnson's knowledge of the Bible and mythology, as well as his phenomenal memory, were legendary.

Because of his liberal philosophy, the editorialist left the Sunpapers in 1943. In a sketch published in North Carolina Authors: A Selective Handbook, he was quoted as saying that he found himself "completely out of line with the political policy of the Baltimore Sun, that I had served for 17 years, and although I was treated with the friendliest consideration it seemed only fair, both to the paper and to myself, to get out." From then on Johnson devoted his energies and talents to free-lance writing, though he held other positions for short periods of time. He substituted for Lewis Gannett on the New York Herald Tribune while Gannett was a war correspondent in Europe, was the American commentator for the London Sunday Express in 1947, and from 1952 to 1954 served as Sunday evening commentator for a Baltimore television station.

Between 1925 and 1976 Johnson published books on a regular basis. Biographies, essays, histories, commentaries on the American scene, novels—thought provoking all—were written by a man described in an editorial in the Greensboro Daily News of 25 Mar. 1980 as "a stirrer-upper, a writer who looked beyond his own time, a progressive voice in an often conservative wilderness."

Gerald Johnson did not regard himself as a historian. In a letter written in 1948, he said: "My books are pure journalism, not historiography. The historian writes authoritatively, for posterity; the journalist writes speculatively, for today. You will find in any of my books that the net result is not an affirmation, but a question, to wit, what significance has this man for us today? I try to give my answer, but it is speculative, not authoritative. It is merely the best guess I can make on the basis of the generally accepted facts.

"Mind you, I am not apologetic. My work has its own values but they are not the values that attach to history. To show the average man, the member of the reading public, how his acts and to a large extent his opinions are modified and controlled by what happened in the past is important—only less important than to discover and record the truth. The historian is the priest; the journalist is his acolyte; but they are, or should be, both servants of the truth."

Johnson's first book, written with William R. Hayward, was The Story of Man's Work (1925). This was followed by What Is News? A Tentative Outline and Randolph of Roanoke: A Political Fantastic (1926); The Undefeated and Andrew Jackson: An Epic in Homespun (1927); The Secession of the Southern States (1933); The Sunpapers of Baltimore (with Frank R. Kent, H. L. Mencken, and Hamilton Owens), A Little Night Music: Discoveries in the Exploitation of an Art, and The Wasted Land (1937); America's Silver Age: The Statecraft of Clay-Webster-Calhoun (1939); Roosevelt: Dictator or Democrat ? (1941); American Heroes and Hero-Worship (1943); Woodrow Wilson: The Unforgettable Figure Who Has Returned to Haunt Us (1944); An Honorable Titan: A Biographical Study of Adolph S. Ochs (1946); The First Captain: The Story of John Paul Jones (1947); Liberal's Progress (1948); Our English Heritage (1949); Incredible Tale: The Odyssey of the Average American in the Last Half Century (1950); This American People (1951); Pattern for Liberty: The Story of Old Philadelphia and The Making of a Southern Industrialist: A Biographical Study of Simpson Bobo Tanner (1952); Mount Vernon: The Story of a Shrine  . . . (1953); Lunatic Fringe (1957); Peril and Promise: An Inquiry into Freedom of the Press and The Lines Are Drawn: American Life since the First World War as Reflected in the Pulitzer Prize Cartoons (1958); Hod-Carrier: Notes of a Laborer on an Unfinished Cathedral and Communism: An American's View (1964); Franklin D. Roosevelt: Portrait of a Great Man (1967); The Imperial Republic: Speculation on the Future, If Any, of the Third U.S.A. (1972); and America-Watching (1976).

In 1959 Johnson published the first volume of a trilogy entitled America: A History for Peter, written to tell the story of America to his twelve-year-old grandson. The three books, America Is Born, America Grows Up, and America Moves Forward, were followed by four other books for young people: The Presidency and The Supreme Court (1962), The Congress (1963), and The Cabinet (1966). A History for Peter was the most successful, in terms of sales, of all his output.

In addition, Johnson wrote two novels: By Reason of Strength (1930), based on his family's migration from Scotland to America; and Number Thirty Six (1933), set in the South during his boyhood. Two mysteries were written under the pseudonym Charles North, a transliteration of North Carolina. Articles by him appeared in leading periodicals, and in 1954 Johnson became a contributing editor and weekly columnist for the New Republic. He also served as a speech writer during the presidential campaigns of Adlai E. Stevenson.

A Democrat, Johnson was born into a family with strong Baptist connections but he himself was not active in any church. His father, Archibald Johnson, was editor of Charity and Children, a Baptist periodical published at the orphanage in Thomasville; and an uncle, Livingston Johnston, was editor of the Biblical Recorder, official organ of the Baptist State Convention. He was a cousin of North Carolina poet John Charles McNeill.

Johnson was described in his obituary in the Baltimore Sun of 23 Mar. 1980 as "a man who never seemed flustered or hurried. He was almost always seen with his cigar or pipe. As he aged and grew increasingly deaf, a hearing aid became indispensable. White-haired and with a white mustache, the writer, who was not a large man, looked frail in his later years, but his ideas remained as robust as ever." Because of deafness, he had to give up flute playing, a hobby he had enjoyed. A dislocated hipbone required the use of a cane for several years before his death.

On 22 Apr. 1922, Johnson married Kathryn Hayward; they had two daughters, Kathryn (Mrs. Frederick Allen Sliger) and Dorothy (Mrs. Leonard van den Honert). His death was preceded by failing health during the last months of his life, and he died at the Edgewood Nursing Home. Following cremation at Greenmount Cemetery, Baltimore, Johnson's ashes were placed in a niche there.

"Hopkins Honors State with Johnson," Raleigh News and Observer, 14 May 1977.