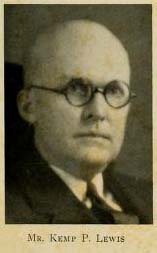 Kemp Plummer Lewis, textile executive, was born in Raleigh, the son of Richard Henry Lewis, a noted physician, and Cornelia Viola Battle Lewis, daughter of Kemp Plummer Battle, president of The University of North Carolina. Also among his forebears was Joel Battle, of Rocky Mount, founder of one of the earliest cotton mills in the South.

Lewis attended the Raleigh Male Academy and was graduated from The University of North Carolina in 1900. A member of Phi Beta Kappa, he joined the baseball and tennis teams and sang in the choir of the Chapel of the Cross Episcopal Church. In October 1900 he was employed by the Erwin Cotton Mills and soon became secretary to founder William A. Erwin. After a short time he assumed the duties of purchasing agent, and in 1904, when a model mill town (named Duke—now Erwin—in honor of Benjamin N. Duke, then president of Erwin Mills) was established, Lewis was named manager of the new mill there. He continued to serve as purchasing agent for both mills. In 1919, when W. A. Erwin succeeded Duke as president of the company, Lewis was promoted to assistant secretary-treasurer. After Erwin died in 1932, Lewis became president and treasurer, positions he held until 1948, when he became chairman of the board, a post he recommended be created, and served until his death.

During his fifty-two years with the Erwin Mills, Lewis saw the company grow from a single mill operating 25,000 spindles to a complex of eight plants boasting nearly 200,000 spindles and producing a variety of cotton textiles. His reputation in the textile industry earned him the presidency of the Cotton Manufacturers Association of North Carolina (1931–32) and of the American Cotton Manufacturers Association (1939–40). He was president of Erwin Mills during the period when many mills in the state were racked by conflicts between union organizers and management. It is noteworthy that Erwin Mills weathered the transitional period with no unpleasantness, due to Lewis's familiarity with and concern for his employees as well as to his pragmatic view that unionization in the southern textile industry was inevitable.

A member of the Cotton Textile Institute, Inc., Lewis served as president of the Erwin Yarn Company of Philadelphia and as vice-president of the Oxford Cotton Mills. He sat on the board of directors of the Durham and Southern Railway Company and of the Fidelity Bank in Durham. He also was president of the Bank of Harnett in Erwin. An active member of St. Philip's Episcopal Church in Durham, he served for many years as a vestryman, including a number of terms as senior warden. He was appointed to the Executive Council of the Episcopal Diocese of North Carolina and was chairman of the finance committee of the diocese.

Lewis remained vitally interested in The University of North Carolina all his life and was a member of the board of trustees (1932–43). His community service included membership on the Durham Board of Education for twelve years. He belonged to the Durham Rotary Club (of which he was also president) and to the Durham Chamber of Commerce, which honored him with the City of Durham 1948 Civic Award.

In April 1912, in Belhaven, he married Lottie Hays Sharp, daughter of Carroll Sharp of Hertford County and niece of W. D. Pruden of Edenton. They became the parents of four daughters: Anne Foreman L. (Orgain), Margaret Pruden L. (Bridgers), Lottie Sharp L. (Woollen), and Martha Hoskins L. (Stanley). He was buried in Maplewood Cemetery, Durham. There are three portraits of Lewis: one as president of Erwin Mills owned by Mrs. Charles T. Woollen, Jr., Charlotte; a small one painted by a family friend, William Shelby Harney; and a larger one owned by the heirs of Mrs. E. S. Orgain, Sr., Durham.