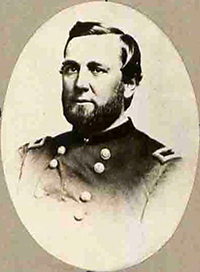 Milton Smith Littlefield, Union officer, dubbed "The Prince of Carpetbaggers," was born in Ellisburgh, Jefferson County, in northern New York, the son of James Pennell and Phoebe Smith Littlefield. His father was a miller and a licensed Baptist preacher; his mother was the daughter of a member of the New York Stock Exchange. Catherine Littlefield, wife of Revolutionary General Nathanael Greene, was his cousin. Littlefield grew up in adjacent Onondaga County near Syracuse, but nothing is known of his education. In 1851 he moved with his parents to Grand Rapids, Mich., where he taught school and served in the local militia.

In 1856, because (it has been suggested) of disappointment in love, Littlefield moved to the small, isolated town of Jerseyville, Ill. Here he began the practice of law, although there are no records to indicate that he was ever licensed. He became involved in the politics of the local Republican party, spoke frequently in public, wrote for the local press (sometimes as a reporter), and made a reputation for himself because of his careful dress and neat appearance. A handsome young man, he had a keen sense of humor and a good singing voice. He became acquainted with Abraham Lincoln and was deeply involved in campaigns on his behalf. Littlefield also was active in the local militia and rose to the rank of captain. With his unit he participated in numerous parades on the eve of Lincoln's election to the presidency and at the beginning of the Civil War.

On 9 May 1861 Littlefield and his troops went off to war. Acquainted with people in high places, particularly leaders of the Republican party, he became the personal emissary of a major general who was a personal friend of Lincoln. On one of his missions back to Illinois late in 1861, Littlefield married Anna Shull. Despite a critical report by his commanding officer, in 1862 Littlefield was promoted to lieutenant colonel in a different regiment and a month later he became deputy provost marshal of the forces around Springfield, Mo. At the Battle of Shiloh in Tennessee in April 1862, he was described as particularly brave in leading his troops. Soon, as the victorious Union army moved towards Mississippi, General William T. Sherman made him assistant provost marshal of Memphis, Tenn.

In Memphis, as Southern cotton became available for the mills of New England, traders with ready money appeared. Littlefield was in a position to deal with them for favors. Certificates of allegiance, much sought by Southerners who wanted to engage in trade, were available for a fee. Sudden fortunes acquired by the invaders were not unusual, and the pattern was set for much that took place a few years later during Reconstruction. Milton S. Littlefield was there to observe, to learn, and to participate. Nevertheless, before he moved on to his next assignment, there was a problem of some sort about both explaining and settling his accounts. He survived the investigation and was then made lieutenant colonel of a new cavalry unit assigned to Peoria, Ill., but he never served with it. Mustered out of service near the end of November 1862, Littlefield was soon in Washington, D.C., carrying out errands for Lincoln.

His first assignment took him to Hilton Head on the coast of South Carolina, occupied by Union forces since 1861 and a source of supplies for blockading ships. Large numbers of New England abolitionists were also there to serve recently freed slaves, and it was Littlefield's job to recruit black troops to join the Union army. Once again in uniform, this time as a colonel, he eventually was given the brevet rank of brigadier general. From a wealthy New England officer killed in an attack on Charleston, he inherited the command of some black troops from Massachusetts who were soon joined by local recruits from among the freed blacks who overran the coastal islands. The recruiting of blacks was promoted by Northerners as a means of reducing the need to draft whites, thus leaving them to be employed in mills and factories. Littlefield, thus encouraged, extended his work along the occupied coast even into Florida. He and his superiors also began to draft tentative plans for the "reconstruction" of the region as it fell under Federal control; some of their ideas later became a part of the radicals' plans adopted in Congress.

In time, Littlefield became general superintendent of the program to recruit black regiments throughout the South. It was he who paid bounties to new soldiers, and with his recruiting efforts he combined political activity for the reelection of Lincoln. He and his friends also engaged in a campaign to secure petitions from 10 percent of the prewar population of occupied states, thereby setting the stage for the creation of a "loyal" government. Following an invasion of Florida for these purposes, Union troops were repulsed with great losses especially among Littlefield's men, although he, himself, was not on the battlefield. The attempt to capture Florida and gain Republican support for Lincoln failed.

Littlefield returned to South Carolina where he recruited (or claimed to have recruited) more black troops, this time credited to the draft quota of his native county—in this way, making friends for himself in New York. Some of his cousins, friends, and associates were involved and, along with Littlefield, were suspected of profiteering in bounties. A total of nearly $200,000 was involved in payments to "paper recruits," but the war ended about the same time this was discovered and little was said of the matter. (Since the North spent about $300 million in bounties during the war, Littlefield's expenditures were not regarded as particularly significant.) It was also possible for someone in the North about to be drafted to "buy" a black substitute from South Carolina for around $500, although sometimes one might cost as much as $900 if the potential draftee were desperate to avoid service. Littlefield was as skilled in providing substitutes as he was in understanding the market.

As Sherman approached South Carolina, he arranged with Littlefield to take care of large numbers of blacks of all ages who had followed the invading army. This he was able to do. General Littlefield, a capable public speaker, was also put to work delivering messages to the public in newly occupied regions from Georgia through the Carolinas. He often spoke in condescending terms, stressing "Yankee" superiority and touching upon aspects of Lincoln's plans for Reconstruction. With the death of Lincoln, his hero, he displayed renewed contempt for the South, tinged with anger.

As Union troops returned home after the war, Littlefield's infantry was also disbanded and he went to Philadelphia where his wife and young son were living. There in the spring of 1866 he became a lumber merchant, expecting to draw upon the splendid forests he had seen in the South for his stock-in-trade. After receiving payment for lumber for future delivery, he was unable to fill the orders when title to land he thought he had acquired in the South proved not to be valid. His scheme collapsed, and late in 1867 Littlefield moved to North Carolina. With several partners from New York, Maine, and elsewhere, he planned to buy depreciated prewar state bonds, use his position and political connections to persuade the state reconstruction convention to declare them valid, and sell them to his great benefit. A North Carolina banker, George W. Swepson, held most of the bonds that these men hoped to acquire; he had obtained them for practically nothing in exchange for postwar bonds.

Three of Littlefield's partners, carpetbaggers all, were elected to the convention. Gifts to representatives—sometimes as simple as a new hat and a pair of gloves—judicially presented, won votes at low cost. The bonds were recognized and the legislature was instructed to levy taxes to pay the interest on them beginning in 1869. The convention also adopted a new constitution destined to make significant changes in the state, and just before adjournment General Littlefield was called upon to address the body. According to an unsympathetic witness, his remarks were a "harangue." The stage was set for Littlefield, as "activator and orator," and his friends, some from the North and some native-born, to profit from their position and connections.

Littlefield acquired extensive land in the coal fields along Deep River, and he was interested in seeing work resumed on a railroad leading to it that had been begun during the war. As a skillful politician he worked diligently, particularly with the recently enfranchised blacks. He was frequently praised as the bearer of capital for investment in the state and as a man of vision. The new governor, newspaper editor William Woods Holden, appointed by President Andrew Johnson, was a strong supporter of Littlefield, and when his political and gubernatorial duties became pressing, Holden sold Littlefield his newspaper, the North Carolina Standard, for a very large figure. Littlefield, it was widely believed, had the backing of the owners of the New York Tribune. Before the year ended, the Standard became a daily instead of a semiweekly and an organ of support for the Republican party as well as for the nefarious activities of carpetbaggers.

Littlefield was involved in an unknown variety and number of schemes, usually with the collaboration of native-born George W. Swepson. They, together with others of their kind, were particularly active in swindling both the state and individuals of millions of dollars by carefully manipulating and bribing legislators and other officials in the acquisition of bonds. Littlefield and Swepson, working as officers and agents of the Western Branch of the Western North Carolina Railroad, acquired stock in their own names, in part by checks that were never presented for payment and through bribes paid members of the "carpetbag legislature." They employed many of the same scams in Florida. It was largely through the influence of friends in high position that they escaped punishment, although the North Carolina General Assembly afterwards appointed commissions to investigate the frauds. The state was unsuccessful in its attempts to have Littlefield returned to North Carolina for trial, and he spent his final years in New Jersey and New York in relative poverty. At one time he was jailed for failure to pay a hotel bill.

He was the father of two sons, Milton S., Jr., and Alfred Calvin. The former became a Presbyterian minister of some note in New York City. Littlefield joined his son's church shortly before his death. He was buried at Kensico, N.Y.

Report of the Commission to Investigate Charges of Fraud and Corruption, under Act of
Assembly, Session 1871-72. Raleigh: J. H. Moore. 1872. https://archive.org/details/reportofcommissi00nort (accessed December 2, 2013).

"The State Of Florida And The Trustees Of The Internal Improvement Fund, Plaintiffs And Respondents, vs. The Jacksonville, Pensacola And Mobile Railroad Company And Milton S. Littlefield, Defendants And Appellants." Court, Florida. Supreme. Cases Argued and Adjudged in the Supreme Court of Florida During the Years 1876-6-8. vol. 16. Tallahassee, Fla.:The Floridian Book and Job Office. 1878. 708-733. http://books.google.com/books?id=4nMDAAAAQAAJ&pg=PA708#v=onepage&q&f=false (accessed December 2, 2013).