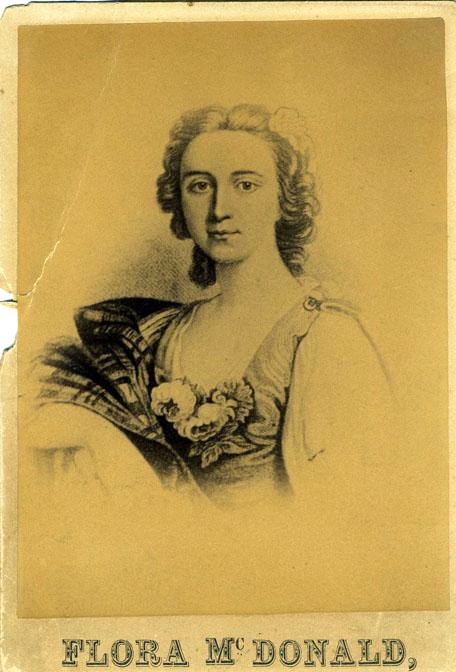 Flora MacDonald, Tory and befriender of the Young Pretender, was the daughter of Ranald and Marion MacDonald, who lived on the Isle of Uist in the Hebrides. Her father died when she was a small child. When her mother married Hugh McDonald, Flora was left with relatives who were responsible for her education. For several years she lived with Lady Clanranald, of her father's family, who hired a governess for Flora. In 1739 Lady Margaret, the wife of Sir Alexander McDonald, invited her to Monkstadt, their home on the Isle of Skye. She went with them to Edinburgh to complete her education but returned to Skye in 1745, an accomplished young lady.

Meanwhile, Charles Edward, the Stuart pretender to the Crown of England, decided to challenge the Hanoverian right to the Crown. When he landed in Scotland, he did not have the support of all its people. Many followed him out of loyalty to the Stuart family, not because they considered it good politics. However, a fairsized army flocked to his support, but its threat was crushed at the Battle of Culloden on 16 April 1746 by the Duke of Cumberland of the royal family. This man, who became known in Scotland as "the Butcher" and "the Bloody Duke," was determined to capture Charles Edward and prevent any future uprisings by the Scots in his support.

Many Scots died for the Young Pretender, and many helped him escape, but the one who received the most attention was Flora MacDonald. The prince reached Skye, but there it seemed that he would be taken, for the island was virtually covered and surrounded by the king's men, many of whom were Scots. Through Lady Clanranald, Flora became a part of the plot to help him escape. The young woman attained from her stepfather, an officer of the king, passports for herself and Betty Burke, an Irish spinning maid who was the fugitive in disguise. After much difficulty she reached Lady Margaret's home, where officers of the king were dining. Flora was so self-contained and so charming that no one suspected that anything was amiss. The next day she and the prince traveled some distance to a boat that took him back to France.

Shortly afterwards the prince's escape became known, and Flora was arrested. For a time she was imprisoned in Scotland, then taken to London and imprisoned in the Tower. She was released under the Act of Indemnity in 1747. All London knew who she was, and many paid homage to her. After accomplishing the release of those arrested with her, Flora returned to Scotland early in 1750. On 6 November of that year she married Allan MacDonald, who was heir to the home in which Charles Edward Stuart, as Betty Burke, had spent the night. Flora became mistress of the home, where she delighted in honoring such guests as Dr. Samuel Johnson by allowing them to sleep on the same bed—even on the same sheets—that had been a refuge for the Stuart prince.

After Culloden many Scots moved to the New World, more for economic reasons than any other. Of these, one-fourth settled in North Carolina after signing the "bloody oath" by which they promised loyalty to the House of Hanover. It was for economic reasons that Allan and Flora MacDonald finally settled in North Carolina in 1774. Wilmington gave a ball in Flora's honor, and she was an overwhelming success socially. When the family reached Cross Creek (now Fayetteville), the people gave her a welcome that far outdid Wilmington. The MacDonalds lived for a while at Cross Creek, then at Cameron Hill, after which Allan bought a tract of land in Anson County. On this property they built a home and named it "Killiegray."

Flora had chosen a bad time to immigrate because the American Revolution was virtually inevitable. She had two sons with the British forces, two sons and a daughter who had come to America with their parents, and a young son and daughter who had been left with relatives in Scotland to go to school. When the king's standard was raised among the Scots in the Cumberland County area, Flora went among the people encouraging them to volunteer.

Allan MacDonald received a commission and joined General Donald MacDonald's forces. The plan for this army was to march to Wilmington, where they would join with British forces to keep North Carolina loyal. General MacDonald was clever, but so were his antagonists: James Moore, Richard Caswell, and Alexander Lillington. At Moore's Creek Bridge on 27 February 1776, the Scots ran into Caswell and Lillington. Among the eight hundred prisoners taken by the Whig forces were Allan MacDonald and one of his sons. Allan was imprisoned at Halifax for a time, then transferred to Pennsylvania. He prevailed upon his wife to return to Scotland, which she was finally able to do in 1779. Since her house had been burned and most of her possessions destroyed, Flora MacDonald sold the silver tea service and other gifts given to her during her imprisonment in London. With this money she was able to secure passage for herself and her daughter on a British man-of-war. On the trip home the British vessel was attacked by the French, and during the skirmish Flora was injured. After the French were driven off she reportedly said, "I have hazarded my life for the House of Stuart and for the House of Hanover and I do not see that I am a great gainer by either." According to some stories, the Scottish heroine had two small children who died and were buried in North Carolina, but there is no proof of this.

Flora MacDonald lived with her brother in Scotland until her husband was released in a prisoner exchange. They returned to Kingsburg (or Kingsborough), their ancestral home in the Highlands. When Flora died, the sheets on which the Stuart prince had slept became her shroud. They had been with her on all of her travels. One of her sons had a marble slab placed on her grave, but over the years it was totally chipped away by souvenir seekers.

For a time an outstanding women's college at Red Springs in Robeson County bore her name, but it is now a part of St. Andrews Presbyterian College in Laurinburg.

Elizabeth F. Ellett, The Women of the American Revolution (1900).

William Henry Foote, Sketches of North Carolina, Historical and Biographical: Illustrative of the Principles of a Portion of Her Early Settlers (1846).

J. P. MacLean, An Historical Account of the Settlement of Scotch Highlanders in America prior to the Peace of 1783 (1968).