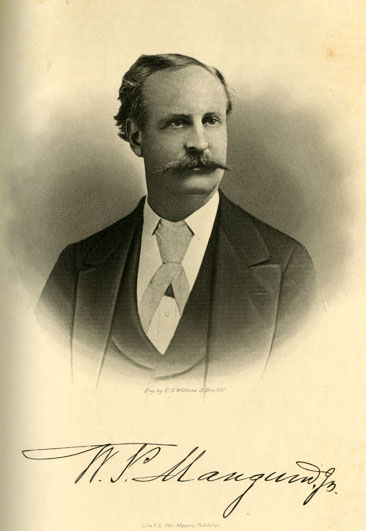 Willie Person Mangum, Jr., diplomat and foreign service officer, was born in Wake County, the son of Priestley Hinton and Rebecca Hilliard Sutherland Mangum. He was the brother of Priestley Hinton Mangum, Jr., and the nephew of his namesake, Willie Person Mangum. He was educated at the Bingham School in Orange County, Wake Forest College, and The University of North Carolina, where he was graduated in 1848. Afterwards he was a tutor at Wake Forest for one year before reading law with his father. After his father's death in 1850, he took a position with the Federal Census office in Washington, D.C. Three years later he returned to North Carolina and resumed his law studies, this time under the tutelage of George Badger. Mangum continued to read law with E. W. Stoughton, a prominent judge and attorney in New York City, and ultimately was admitted to the bar in New York and the District of Columbia, where he began practicing in 1855. He was also licensed to practice before the U.S. Supreme Court.

Mangum practiced law until 1861, when he was commissioned, on 27 March, as consul to Ning-po, China. There he rendered valuable service during the disorders of the Taiping rebellion. In 1864 he was transferred to Chinkiang but in the same year was forced to return to the United States because of poor health.

In 1865, having recovered his health, Mangum was appointed consul to Nagasaki, Japan. He held this post until 1880, through the momentous years of the opening of Japan to the West. In 1867 he returned briefly to China where, as acting consul at Shanghai, he established the first American mail service in China. In 1874–75 he was chosen by the representatives of England, Holland, and Japan to arbitrate the Takashima mines dispute. In 1880, for reasons of health, Mangum was transferred to Tientsin, in northern China, where he died the next year.

During his tours of duty, Mangum was highly regarded by the consular corps in both China and Japan. He was among the first Caucasians to visit parts of Japan after its opening to the West. He was elected a nonresident member of the North China branch of the Royal Asiatic Society.

In 1855, shortly after he began practicing law in Washington, D.C., Mangum married Fannie Vaulx Ladd. They had no children. During her travels with her husband in the Far East, Mrs. Mangum became something of an authority on Chinese and Japanese coins and ceramics. After his death, Mangum's remains were interred briefly in China but subsequently were brought back to the United States and reinterred in the congressional cemetery in Washington.