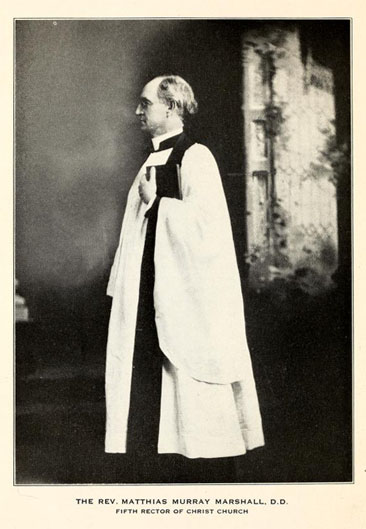 Matthias Murray Marshall, Episcopal clergyman and Confederate chaplain, was born in Pittsboro, the son of Abel and Delana Gunter Marshall. His father was a cabinetmaker and local official; his mother was the daughter of Abner Gunter, clerk of court of Chatham County for over forty years. Educated first in local schools in Pittsboro and Graham, he attended Trinity College in Hartford, Conn., from December 1858 until May 1861, when he was obliged to leave because of the outbreak of the Civil War. He enlisted in the Confederate army and was commissioned a lieutenant, but frail health—a constant throughout life—forced him to resign after a brief service. Resuming his education, this time at The University of North Carolina, he was graduated in June 1863 and received the M.A. degree in 1866. The College of William and Mary later awarded him a D.D. degree.

Early in December 1863 Marshall was ordained a deacon in the Episcopal church and was named chaplain of the Seventh Regiment, attached to the Army of Northern Virginia. He went at once to join the regiment near Orange Court House, Va., but soon became ill from exposure and never returned to camp. Instead, he was made chaplain at the army hospital at Kittrell Springs, where he served until the end of the war. He also was in charge of St. James's Church, which had been recently established there. Fifty-two soldiers died at the hospital during Marshall's tenure, and each was given burial according to the ritual prescribed by the soldier's professed faith.

Ordained to the priesthood in September 1865, Marshall officiated at Christ Church, Elizabeth City, from 1865 to 1867. Here, in 1866, he married Margaret Susan Wingfield, the only daughter of the Reverend John H. Wingfield of Portsmouth, Va. They had eight children, six of whom survived infancy.

Marshall died in Morganton and was buried in Oakwood Cemetery, Raleigh.

Cyclopedia of Eminent and Representative Men of the Carolinas, vol. 2 (1892). http://www.carolana.com/NC/eBooks/Cyclopedia_of_Eminent_and_Representative_Men_of_the_Carolinas_Volume_II_NC_1892.pdf (accessed August 12, 2014).

Haywood, Marshall De Lancey. Lives of the bishops of North Carolina from the establishment of the episcopate in that state down to the division of the diocese. Raleigh, N.C.: Alfred Williams & Company. 1910. https://archive.org/details/livesofbishopsof00hayw (accessed August 12, 2014).