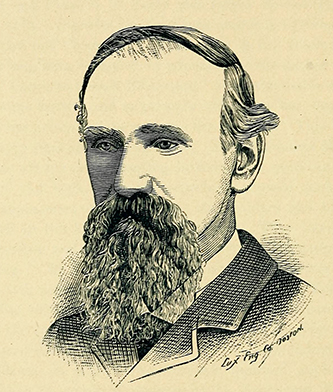 William Joseph Martin, educator and Confederate officer, was born in Richmond, Va., the son of Edward Fitzgerald and Frances Anne Foster Martin. His father, a native of County Cork, Ireland, immigrated to the United States in 1803; he apparently was a teacher and a physician until his death in 1860.

After graduation from the University of Virginia in 1854, Martin became professor of natural science at Washington College in Pennsylvania. While there he married Susan A. McCoy of Warrenton, Va. In 1857 he joined the faculty of The University of North Carolina as professor of chemistry, mineralogy, and geology; his wife died the following year. Also in 1858 Columbian College in the District of Columbia awarded him an honorary A.M. degree. Martin soon earned a reputation as an able chemist, and in 1861 he classified the collection of rock specimens of Ebenezer Emmons, state geologist. During the school terms of 1860 and 1861, as drillmaster, he instructed students in the military arts. Nevertheless, he was giving serious thought to entering Union Theological Seminary in 1861, when the Civil War began.

Granted a leave of absence from the university, Martin became captain of Company G, composed of Orange County men, Twenty-eighth Regiment of North Carolina Troops, on 2 Sept. 1861. In April 1862 he was promoted to the rank of major and in May was transferred to the Eleventh Regiment as a lieutenant colonel. He saw extensive duty in Virginia (sometimes in command of the brigade), was seriously wounded four times, and was promoted to colonel in April 1864. In 1865 paperwork was under way to make him a brigadier general, but the war ended and he was paroled at Appomattox Court House on 9 Apr. 1865.

In the fall Martin returned to Chapel Hill to resume his position on the faculty. Because of the university's lack of support during Reconstruction, he resigned in 1867 and moved to Columbia, Tenn. There he founded Columbia High School and remained at its head until 1870, when he returned to North Carolina and became chairman of chemistry, geology, and natural history at Davidson College. In 1875, when The University of North Carolina reopened (it had closed four years earlier), efforts were made to entice Martin to return to Chapel Hill, but he felt his services were more important to Davidson. In 1887, after having declined numerous other offers, he accepted the chair of chemistry at Davidson, a post he occupied for the remainder of his life. For a time he also served as bursar of the college, and in 1884 he became vice-president. He served as acting president during the period 1886–88 but declined an appointment as president because of his age and ill health.

Martin received honorary LL.D. degrees from Hampden-Sydney in 1887 and The University of North Carolina in 1889.

In 1863, five years after the death of his first wife, he married Letitia Coddington Costin of Wilmington, N.C. They became the parents of ten children, but only Miles Costin, William Joseph, Jr., Mary (the noted Dr. Mary Martin Sloop who, with her husband, founded and maintained the mountain school at Crossnore), and Lucy Battle lived to maturity. Martin was buried in the Davidson College cemetery.