Millie-Christine McCoy, Siamese twins, were born in Welches Creek Township near Whiteville, the daughters of Jacob and Monemia, slaves of Jabez McCoy, a local farmer. Their potential 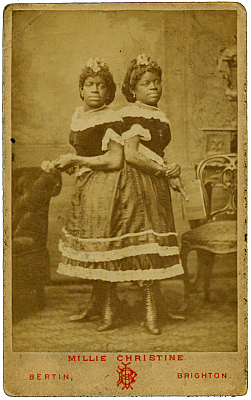 show value was recognized early, and between 18 May 1852 and 1860 they passed through several hands. Their first real promoter was W. J. L. Millar, a professor turned showman, who picked them up in Boston when they were four and took them to Canada, Great Britain, and the Continent. Their last manager and legal owner was Joseph Pearson Smith, and sometimes the twins were known as Millie and Christine Smith. Smith reportedly paid $30,000 for them. The twins were abducted twice before they were ten, once by some men described as "a group of prizefighters sent for the purpose." During this period, Smith's father and Monemia searched for them for three years, the trail leading from New Orleans to Scotland and England.

Having regained possession of them, the elder Smith brought them back to America about 1860 and later hid them in the countryside near Spartanburg, S.C., to prevent their being taken by Union troops during the Civil War. Freed after the war, the twins embarked on their major tours and were seen by "the crowned heads" of Europe. Queen Victoria presented them with matching brooches. Millie and Christine appeared in forty-six of the American states and traveled widely around the world, often in conjunction with P. T. Barnum's circus.

They were presented primarily as medical curiosities and were frequently examined by local physicians. While still infants they were examined in Edinburgh by Dr. James Simpson, the discoverer of chloroform. Millie and Christine together weighed seventeen pounds at birth and were joined by a short ligament about five inches in diameter. According to a medical report, "Millie-Christine was united at the lateral, posterior portion of the pelvis, the sacrum and the coccyx joined, the lower part of the spinal cord united."

Although so handicapped, in their childhood they tumbled about playfully, two bodies acting as one and being able to walk on two or four legs. In conversation the twins referred to themselves as "I." Their native intelligence, cheerful nature, and vocal talents presented the more human side of their personalities. They often were billed as the "Carolina Nightingale," with Christine singing soprano and Millie alto. As children they received private tuition and in their travels picked up two or three languages.

Prosperity enabled Millie and Christine to buy the original McCoy property and on it they built a ten-room house where they lived between tours. After 1900, they left it only occasionally to appear at county fairs. The house burned down in 1909, destroying treasures from the far corners of the world. Three years later Millie succumbed to tuberculosis, and Christine died the next day.

The twins were buried in a double coffin. The grave marker is inscribed: "A soul with two thoughts. Two hearts that beat as one." In 1969 the Columbus County Historical Society moved the grave from an overgrown, almost forgotten plot to the nearby Welches Creek community cemetery.

The Greatest Wonder of the World: Millie Christine, the Two-Headed Lady (n.d. [portrait])

Millie-Christine. 18??. The history of the Carolina twins: told in their own peculiar way. [Buffalo]: Buffalo Courier Printing House. https://archive.org/details/historyofcarolin00mill

Fiedler, Leslie A. 1978. Freaks: myths and images of the secret self. New York: Simon and Schuster.