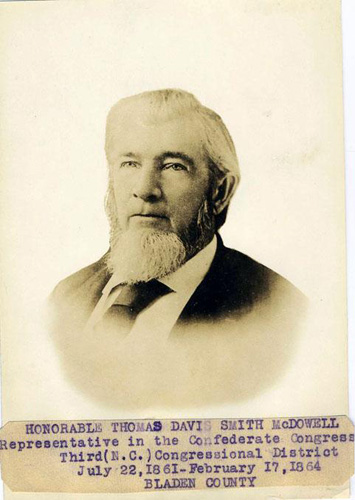 Thomas David Smith McDowell, planter, legislator, and Confederate congressman, was born on his parent's plantation in Bladen County. His father, Dr. Alexander McDowell, was born in Ballydavy, County Down, Ireland, on 1 Nov. 1775. He was graduated from Edinburgh College and the medical school of the University of Glasgow, Scotland, but he became so deeply involved in the Irish struggle for independence that eventually the deteriorating fortunes of that movement forced him to immigrate. He reached the Cape Fear region in 1812, began practicing medicine in Elizabethtown, and married the widow Mary Jane Smith Purdie.

Thomas McDowell studied at the Donaldson Academy and then entered The University of North Carolina, where he was graduated in 1843; he later served as a university trustee from 1858 to 1860 and from 1874 to 1881. Both his parents died within the decade and for the rest of his life McDowell managed the Purdie plantation on which he had been reared. In 1860 it contained 320 acres and 57 slaves and was valued at $65,000.

A lifelong Democrat, McDowell served in the state House of Commons from 1846 to 1850 and in the senate from 1852 to 1855 and from 1858 to 1860. He was a longtime member of the Senate Committee on Education and the Literary Fund, but he sponsored no particular program; his bills ranged from the incorporation of the Cape Fear Division of the Sons of Temperance to the banning of the emancipation of slaves by the owner's will after his death. McDowell's strong Unionism is indicated by a resolution he introduced in 1851 that the states "may well yield somewhat in the conflict of opinion and policy" and that the legislature should endorse the Compromise of 1850. He opposed secession until President Abraham Lincoln's call for troops following the firing on Fort Sumter, but then as a member of the secession convention he voted for disunion. He won a close contest in the convention for a seat in the Confederate Provisional Congress, and in October 1861 he was elected to the First Congress without opposition.

McDowell's chief interest as a congressman was the defense of the North Carolina coast, his only other proposal being that slaves captured from Union armies should be sold and the proceeds distributed among the troops capturing them. At first he consented to legislation granting the administration of Confederate president Jefferson Davis the necessary war powers, but after 1861 he resisted most efforts to amplify or extend them. When the administration requested new and even more extreme measures, such as suspending the writ of habeas corpus or repudiating the inflated currency, McDowell opposed them adamantly. He did not run for reelection in 1863.

After the war McDowell took no further role in public affairs. By 1885 he had turned over to his sons most of the operation of his plantation. He died there and was buried in the family cemetery outside of Elizabethtown.

In his Reminiscences, John H. Wheeler wrote that McDowell was "one of the purest men in public and private life that I ever knew." McDowell married Mary Elizabeth Davis, the daughter of Dr. Goodwin Davis of Richmond County. They had two sons, Alexander and John. The McDowell family was Presbyterian.