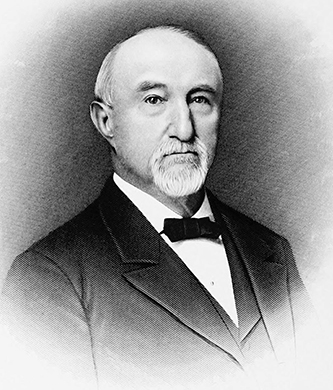 John Fulenwider Miller, physician, was born in Rutherford (now Cleveland) County of Scotch-Irish descent. His father, William John Twitty Miller, was a prominent physician and planter who served in the state legislature; his mother, Elizabeth Fulenwider Miller, was a native of Lincoln County. John spent his childhood on a plantation in the foothills of southwestern North Carolina, where he obtained his earliest schooling in nearby Shelby. Later he attended Cokesbury High School in South Carolina and then The University of North Carolina (1854–55). He received medical instruction from his father before taking his first course of study at the Medical College of the State of South Carolina and his second course at the Jefferson Medical College of Philadelphia, from which he received a medical degree in 1858.

Returning to North Carolina, Miller practiced medicine with his father until the outbreak of the Civil War, when he promptly enlisted in the Cleveland Guards as a private on 22 Apr. 1861. After one month's service he was appointed assistant surgeon of the Twelfth North Carolina Regiment. Promoted to surgeon of the Thirty-fourth North Carolina Regiment in June 1862, he served in this post until August 1864, when he was commissioned an examiner of hospitals for the Army of Northern Virginia. In December 1864 he was appointed chief surgeon of the Department of Eastern North Carolina and Southern Virginia and attached to General L. H. Baker's staff. He was serving in this capacity when, in 1865, General William T. Sherman's column under the command of General O. O. Howard found him at Louisburg, tending the wounded. Choosing to surrender rather than leave the wounded in Howard's care, Miller became a prisoner of war. He received his parole in Goldsboro on 12 May 1865.

After the war he settled in Goldsboro and maintained a private practice in general medicine until 1 Jan. 1888, when he assumed the duties of superintendent of what became Cherry Hospital, a state institution for insane blacks at Goldsboro. He held this position until his death eighteen years later. That he was a most capable director is evident from the history of the Goldsboro institution and from the reports of the Examiners of State Institutions.

Miller's single contribution to medical literature was embodied in his article published by the North Carolina Medical Journal in 1896, entitled "The Effects of Emancipation upon the Mental and Physical Health of the Negro of the South." He also presented papers on the same topic before the Medico-Psychological Association at Asheville in 1896 and the Tri-State Medical Society in Charleston, S.C., in 1902. Some considered Dr. Miller a pioneer writer on the insanity of the Negro, whereas others believed he was a representative of that segment of the scientific community that helped foster concepts of racial inferiority. In attempting to explain the alleged increase in black insanity after emancipation, he stated that while the Negro could live in comfort "under less favorable circumstances than the white man, having a nervous organization less sensitive to his environments, yet it is true that he has less mental equipoise, and may suffer mental alienation from influences and agencies which would not affect a race mentally stronger."

A devout Methodist, Miller was frequently a delegate to the annual conference of his church and became president of the Advocate Publishing Company, the literary organ of the North Carolina Conference. After suffering slightly for some time from heart disease, he died at his home on the hospital grounds at Goldsboro. He was buried in Willowdale Cemetery.

Sistrom, Michael. "Summary of The Effects of Emancipation upon the Mental and Physical Health of the Negro of the South." Documenting the American South, University of North Carolina at Chapel Hill. 2004. https://docsouth.unc.edu/nc/miller/summary.html (accessed April 30, 2013).