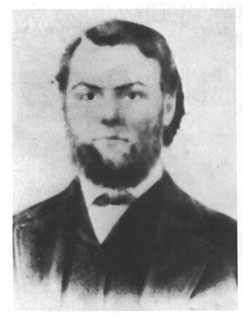 John Carr Monk, physician and religious leader, was born in Westbrooks District, Sampson County, the second of eleven children of Archibald and Harriet Hargrove Monk. He received his elementary education in a one-room schoolhouse on his father's plantation and then attended nearby Spring Vale Academy. Following his graduation in 1846, he taught in the Sampson County common schools for four years. The encouragement of friends in the medical profession in Clinton led Monk to matriculate at the University of Pennsylvania, where he was awarded a doctor of medicine degree in 1852.

Returning to Sampson County, he actively supported the Whig party and various local and state projects for internal improvements. He also took a keen interest in Masonic affairs, first as a member of Hiram Lodge No. 98 and then of Mill Creek Lodge No. 125. Monk served in the latter lodge at different times as junior warden, senior deacon, and worshipful master. In 1855 he began acquiring property in Newton Grove, thenceforth his permanent residence. Confident of his good judgment, Monk's neighbors frequently called upon him to be a witness to wills and deeds and to be the executor of wills. The dedicated physician was long a familiar figure about the countryside, sometimes traveling as far as forty miles in his horse-drawn buggy to attend patients in Sampson, Johnston, and Wayne counties.

Politics increasingly drew Monk's attention as the Civil War approached. Sampson County Whigs who gathered in Newton Grove in October 1860 selected him to go to Salisbury to meet with other concerned individuals to try to devise a means of strengthening the cause of the Union in North Carolina. Four months later he was a Unionist candidate for a proposed state convention to consider secession. Although he was not elected, he did have the satisfaction of seeing the convention rejected by voters across the state. When the General Assembly itself called for the election in May 1861 of delegates to a convention, Monk again took the field, this time as Sampson County's sole Unionist candidate; Westbrooks District gave him his only votes.

The advent of secession did not dampen Monk's political spirits. In September 1861 he was appointed a delegate for Sampson County to the convention to nominate a candidate to represent the Third District in the Confederate Congress and also to name an elector for the district in the forthcoming presidential election. Monk enlisted on 3 Mar. 1862 as surgeon to the Twenty-fifth Militia Regiment, Sixth Brigade, and saw fighting firsthand when the Battle of Bentonville took place in 1865 a few miles from Newton Grove.

After the war Monk joined the Republican party and continued his involvement in community affairs. The economic dislocation of the times prompted the enterprising doctor to augment the income from his medical practice by establishing a dry goods store and drugstore on his Newton Grove property. Located in the same building was the post office, where Monk once held the postmastership for ten months. His prestige was such that in 1868 he was elected the first Sampson County trustee of The University of North Carolina under the new state constitution of that year. Throughout the county he was known for his personal integrity, strong individuality, and jovial disposition.

For many years Monk belonged to Goshen Methodist Church, but the ejection there in 1870 of Negro members caused him to rethink his religious views. Early the next year he happened to receive a shipment of medical supplies from New York City. Wrapped around one of the items was a copy of the New York Herald containing a sermon of Archbishop John McCloskey about the unity of belief in the Roman Catholic church. Monk was so impressed by the archbishop's words when he read them that he wrote a letter "To Any Catholic Priest" in Wilmington requesting further information about Catholic doctrines. The letter reached the hands of Bishop James Gibbons, who promptly recommended various books for Monk to study. The correspondence that opened between the two men ended in Monk's conversion to Catholicism. Gibbons baptized the doctor and his family in St. Thomas's Church, Wilmington, in October 1871.

In spite of an initial hostility to Monk's new faith on the part of many people in the Newton Grove area, the first Catholic priest arrived there in 1872 and preached outdoors to a sizable group of curious farmers. Gibbons himself came in due course to preach and to baptize several converts. On that occasion Gibbons and Monk decided that regularly scheduled visits by a priest were warranted. The crowds that turned out for those visits grew so large that it became necessary to erect a temporary shelter for their accommodation and to make plans for the construction of a permanent church and a schoolhouse. Monk donated money and land for the buildings, and work on them soon commenced. St. Mark's Church was consecrated by Gibbons in August 1874, and a parochial school was opened within a year. By 1877 the congregation of St. Mark's numbered about one hundred people. Twenty years later three hundred Catholics attended services at the church, a fact that inspired Gibbons to refer to the first convert as "the Monk who fathered three hundred children." As a result of Monk's conversion, Newton Grove today is the most solidly Catholic rural community in North Carolina.

In May 1855 Monk married Euphemia Alice Eason, the daughter of John and Elizabeth Williams Eason of Meadow District, Johnston County, by whom he had three daughters. He died of apoplexy at his home in Newton Grove and was buried in the Catholic cemetery behind the church that he founded.

A man of medium height and weight with brown hair and eyes, Monk wore a close-cropped beard that accentuated his piercing gaze, the intensity of which is captured in daguerreotypes and a charcoal portrait. In the outdoor drama, Echoes from the Grove, presented during the Newton Grove centennial in August 1979, Monk and his father figured conspicuously. References to and letters from Monk appear in the St. Thomas's Church Baptismal Register, St. Mary's Rectory, Wilmington; the Diary of James Cardinal Gibbons, Archives of the Archdiocese of Baltimore, Md.; and the Griffith John McRee Papers and the University of North Carolina Papers, Southern Historical Collection, University of North Carolina at Chapel Hill.

Great piece about my Great