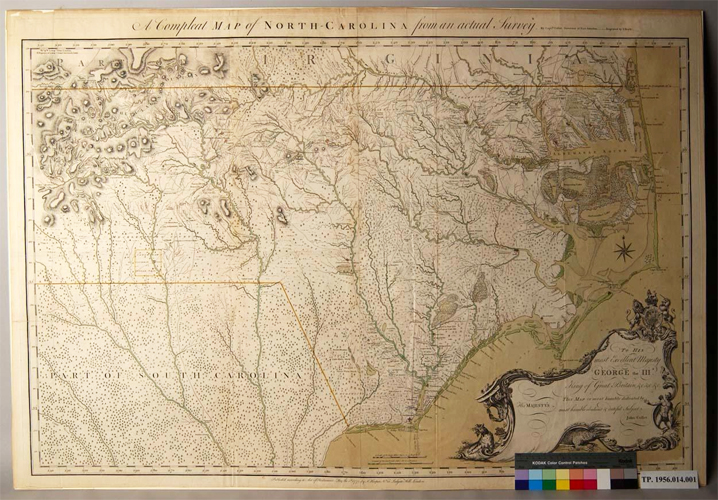 George Moore, planter, legislator, and public official, was born in South Carolina, the only child of Roger and Mary Moore, although he had a half brother, William, and three half sisters, Sarah, Mary, and Anne, who were the children of Roger and Katherine Rhett Moore (1705–45). His paternal grandparents were James (1650?–1707?), who went to South Carolina from Barbados in 1674, and Margaret Berringer Moore (b. 1660), the daughter of Colonel Benjamin of Barbados and Margaret Foster Berringer. Young George's family moved to New Hanover County, N.C., in 1723.

George Moore was the father of twenty-eight children. His first wife, whom he married on 19 March 1739, was Mary Ashe (1723–61), the daughter of John Baptista Ashe (who was the brother of Governor Samuel Ashe). Between 1742 and 1761 they had fifteen children, eight of whom died young. On 3 September 1761, following the death of his wife earlier in the year, Moore married Sarah Jones, the daughter of Thomas Jones. She bore him thirteen children, but, according to a notation in Moore's copy of the Book of Common Prayer, only six survived to maturity.

Moore served the first of a number of terms in the colonial Assembly in 1744, was reelected to a second term, and then served continuously from 1755 to 1762. The journal indicates that Moore was an active member and that he was concerned about the welfare of his constituents as well as others in the colony. He served on a number of committees and was frequently chairman. Often he was designated to take bills from the Assembly to the Council for final action. On one occasion when Governor Arthur Dobbs recommended him for a seat on the Council, he declined it.

In 1746 Moore was one of the commissioners appointed to run the southern line of the Granville District, and in 1748 he was one of the commissioners charged with building a fort (later named Fort Johnston) at the mouth of the Cape Fear River. In 1753 he obtained authorization from the Council to resurvey a three-thousand-acre tract in Duplin County granted to his father in 1727 because he could not trace the lines as described in the grant.

On 19 February 1766, in the midst of the Stamp Act crisis in the colony, Moore and Cornelius Harnett delivered a letter to Governor William Tryon, signed by Speaker of the House John Ashe, Alexander Lillington, and Thomas Lloyd, warning the governor of an impending march on his house and seeking to know if the governor wanted an armed guard placed around the house. Tryon declined, but his action gave the local men a clue as to what his reaction might be to their threats.

Throughout most of his adult life, Moore was known as George Moore of Moore Fields because he held an extensive tract of land lying north of Wilmington. His residence, Kendall, was at Rocky Point, some fifteen miles from the port town in an area that served as a center of influence in the years just prior to the American Revolution. Many prominent families of the time lived nearby. Moore also owned numerous slaves and had a summer residence on the sound.