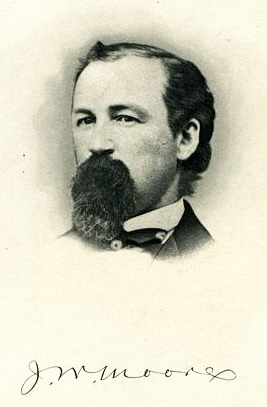 John Wheeler Moore, historian, was born at Mulberry Grove, his father's plantation in Hertford County, the oldest child of Dr. Godwin Cotton and Julia M. Wheeler Moore. The Cottons and the Moores had long been prominent in the affairs of the region. Godwin Moore is credited with having been the main force behind the establishment of Chowan Baptist Female Institute (now Chowan College) at Murfreesboro in 1848. Moore's mother's family was from Murfreesboro, where his grandfather and namesake, John Wheeler, had been a successful merchant.

Moore's earliest education consisted of private tutoring at home. He was prepared for college at Buckhorn Academy in the Maneys Neck section of Hertford County under the direction of John Kimberly. In July 1849 he matriculated as a freshman at The University of North Carolina, where he became a member of the Philanthropic Society. Moore was graduated with a B.A. degree in 1853.

Returning to Hertford County, he married and began to study law at home. After admission to the bar in 1855, he moved to Anniesdale, a home he had built on the outskirts of Murfreesboro, and began to practice law in that town. During the decade preceding the Civil War, Moore was extremely active in the Democratic party. Nominated for a seat in the state senate in 1856, he lost the election but he did serve as a presidential elector in 1860.

On the outbreak of the Civil War, Moore was commissioned as a staff officer in the Second Regiment of North Carolina Cavalry. In February 1862 he was promoted to major and given command of the Third North Carolina Battalion, a light artillery unit consisting of three batteries. The battalion was immediately ordered to assist in the defense of Richmond and remained with the Army of Northern Virginia until December 1862. At that time, Moore's outfit returned to eastern North Carolina and saw action at Goldsboro, New Bern, and Wilmington. For the remainder of the war, the three batteries were stationed in the Lower Cape Fear River until the retreat of the Confederate forces at the fall of Fort Fisher. Afterwards, the battalion took part in the Battle of Bentonville and surrendered at Greensboro.

After the war, Moore resumed his legal practice in Murfreesboro. However, when Anniesdale burned in 1866, the family was forced to move to Maple Lawn, his wife's ancestral home in lower Hertford County.

Although Moore had long engaged in literary pursuits, the move to Maple Lawn marked the beginning of an active period of historical research. At the urging of his friend Chief Justice W. N. H. Smith, he began the compilation of a School History of North Carolina in 1876. The book, published in 1879, was an immediate success and served for years as the standard school history of the state. Moore's next project was a series, entitled "Sketches of Hertford County," that appeared serially in the Murfreesboro Inquirer in 1877 and 1878. He then decided to expand his idea of a state history into a two-volume octavo edition, which was published in 1880 as the History of North Carolina, from the Earliest Discoveries to the Present Time. Moore drew heavily from the works of previous historians such as Francis X. Martin, Hugh Williamson, Francis L. Hawks, David L. Swain, John H. Wheeler, and Joseph Seawell Jones. Like the school history, this work was highly acclaimed.

In 1881 he published The Heirs of St. Kilda, a novel based on the plantation culture of his youth. Unfortunately, Moore's florid, romanticized style of fiction received scant attention. However, the same year marked the beginning of the most ambitious project of his career, as he was commissioned by the state to prepare a Roster of the North Carolina soldiers who had served in the Civil War. The magnitude of the task was exacerbated by the scarcity of records within the state. Fortunately, Secretary of War Robert T. Lincoln granted him access to the Confederate archives, which had been taken to Washington, D.C. Here he found the returns of all North Carolina regiments except the Sixty-eighth. Moore's Roster represented the first attempt by any Southern state to list its Confederate soldiers.

A devout Baptist, Moore spent the last years of his life preparing a history of the Baptist church in North Carolina. This work was never published; the manuscript is at Wake Forest University.

Moore died of a heart attack at Maple Lawn and was buried there in the family cemetery. A portrait of him is owned by a descendant.