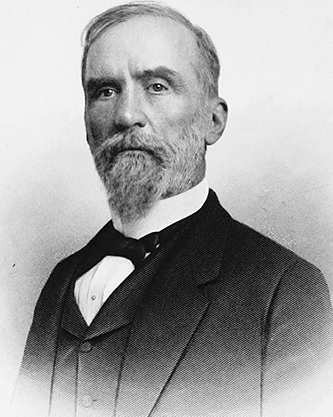 John James Mott, "Iron Duke" of the Republican party in North Carolina during the last half of the nineteenth century, physician, and hydroelectrical pioneer, was born in Hillsborough, where his father, the Reverend Thomas Smith Webb Mott, was serving as an Episcopal priest. The elder Mott was a member of a prominent family of Nova Scotia, and his wife, Susan Amanda Phillips Mott, was a woman of strong character. Three of their sons became practicing physicians. Later the Reverend Mr. Mott taught school on Lower Creek, near Lenoir in Caldwell County, where John James grew up and began his education.

Young Mott attended Catawba College (then in Newton) and was graduated from Jefferson Medical College in Philadelphia. In 1856 he began practicing medicine at Beattie's Ford and, on 8 July, married Theodosia Carolina Hendrix of Wilkes County. They had nine children, one of whom, Marshal L., became district attorney for the Indian Territory.

An enthusiastic Whig in pre–Civil War days, John James Mott was elected to the legislature from Catawba County during Andrew Johnson's Reconstruction in 1866 and 1867. He joined the Republican party when it was organized and remained loyal to it except during the Free Silver campaign of 1896, when he became national chairman of a Free Silver party and voted for William Jennings Bryan.

In 1868, in a hard battle and with Republican support led by Tod R. Caldwell, he was elected president of the eastern branch of the Western North Carolina Railroad, replacing Colonel Samuel McD. Tate, a Democrat. Two years later Mott moved to Statesville and in 1872 was named collector of internal revenue for the large Sixth District in place of Samuel H. Wiley of Salisbury. It was from that office and as chairman of the state Republican committee from 1876 through 1886 that he strengthened his hold on state politics and became known by friend and foe as the Iron Duke of the Republican party.

While the states to the south were surrendering even the presence of a Republican organization, Mott was contesting North Carolina inch by inch with his political enemies. In 1872 he helped in the election of Caldwell as governor and of Augustus S. Merrimon as senator over Zebulon B. Vance. Ten years later he organized the "liberal" movement as an outgrowth of the anti-Prohibition campaign of 1881 that he had directed. Largely by implicating the Democrats in the Prohibition movement, he brought several leading Democrats into the Republican ranks, including Dr. Tyre York of Wilkes, who in 1882 defeated William M. Robbins of Statesville in the race for the U.S. House of Representatives when he had been considered unbeatable.

Mott wielded the patronage afforded by the Western North Carolina Railroad and the collectorship of internal revenue with an iron hand, and as chairman of the state Republican committee he insisted on concentrating on local elections and not wasting energies on hopeless statewide contests such as judgeships. Twice he came close to seizing control of the legislature by such tactics. In the 1890s he welcomed the fusion with the Populists and heartily united with them in an attempt to wrest control of the state from the Democrats.

After his term in the legislature of 1866–67, Mott was never again elected to a government office, although it is suspected that if the Republicans had taken control of the legislature, he would have been candidate for the U.S. Senate. When the Fusionists took over in 1895, he sought his party's nomination but lost to Jeter C. Pritchard. Mott had opposition in his own party. His policy of concentrating on local offices to the exclusion of statewide races, although successful, created a conflict with Logan Harris, a black leader of Raleigh, and with other Raleigh leaders in 1886, the year Mott lost the chairmanship of the Republican party. Even in Statesville there were two Republican factions, with David M. Furches, Republican candidate for governor in 1892 and later chief justice of the North Carolina Supreme Court, active in the opposing faction.

In 1907 Mott sold his farm east of Statesville to his son-in-law and moved to Radford, Va. During the next few years he bought up land along the New River and its tributaries, and in 1911 he organized and became president of the Dominion Power Company, a million-dollar corporation. Later he purchased a new home in Statesville, spending part of his time in Radford and part in Statesville. He died in Radford and was buried in Oakwood Cemetery, Statesville.