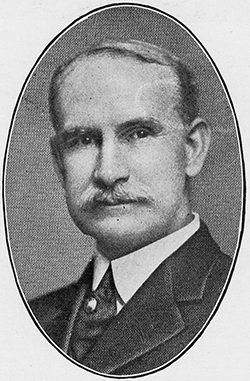 John Peter Munroe, physician and medical educator, was born in Cumberland County, the youngest of seven children of Peter and Isabella Jane Cameron Munroe. His father, of Scottish ancestry, was a well-known architect and builder of churches and civic buildings in North Carolina. Following early education at the Raeford Institute, Munroe in 1878 enrolled at Davidson College, where he became a member of Sigma Alpha Epsilon fraternity, was elected to Phi Beta Kappa, and received a bachelor of arts degree in 1882. After teaching for two years in a private school with Dr. Alexander Graham and for one year at Raeford Academy in Fayetteville, Munroe enrolled in the University of Virginia, where he received a doctor of medicine degree in 1885. On completing his internship at St. Luke's Hospital in Richmond, Va., he returned to North Carolina and engaged in private medical practice in Durham for three years.

In 1890 Munroe moved to Davidson College to serve as college physician, succeeding Dr. Paul Brandon Barringer. Barringer, who had organized the medical preparatory department, had resigned as director in 1899 to accept an appointment at the University of Virginia. On his arrival at Davidson, Munroe became chief of the two-year medical curriculum. Under his direction, the curriculum was expanded into a three-year program and the school was reorganized and incorporated as the North Carolina Medical College in 1893. Munroe taught anatomy, physiology, medicine, obstetrics, surgery, pathology, and neurology as well as serving as president of the Medical College. In 1896 and 1901 new buildings were constructed to serve as a college infirmary, operating suites, and teaching amphitheaters. In 1902 the senior class began attending clinical instruction at the Presbyterian and Good Samaritan hospitals in Charlotte, and in 1903 the curriculum was further enlarged to include a full four-year course of study, including internships at Presbyterian Hospital beginning in 1905. In 1907 the entire Medical School was moved from Davidson to Charlotte, where it remained until its merger with the Medical College of Virginia in Richmond during the fall of 1914, following an unfavorable report in 1910 by the Flexner Commission.

From 1915 until his retirement in 1939, Munroe returned to the private practice of internal medicine and neurology, first in Charlotte, where he organized the Munroe Clinic in 1923, and later after returning to Davidson from 1938 to 1940.

Active in the Presbyterian church, Munroe served for several years as director of music at the Davidson Presbyterian Church and played a central role in establishing the Presbyterian Hospital and Charlotte Sanitorium. He also organized two cotton mills, serving as president of the Dellberg Linden Cotton Mills at Davidson until 1923 and as director of the American Trust Company of Charlotte. Munroe belonged to the Kiwanis Club, Good Fellows Club, Scottish Rite Masons, and Shriners and was an elder of the First Presbyterian Church of Charlotte. He was president of the Mecklenburg County, Tri-State, and North Carolina medical associations; a member of the Southern and American medical associations; and a Fellow of the American College of Physicians. He served as contributing editor to the journal, Medical Clinics of North America, and published a number of original studies in the fields of neurology and internal medicine. From 1916 to 1925 he was chairman of the executive committee and business manager of the Charlotte Sanitorium; he later served as president of the sanitorium. In recognition of his work in medical education, Davidson College awarded him an honorary doctor of letters degree in 1919.

Munroe never married. He was buried in the family plot at Davidson, where he died shortly after retirement.

Very well done. Dr. Munroe is my Great Grand Uncle on my mother's side. They thought the world of him.