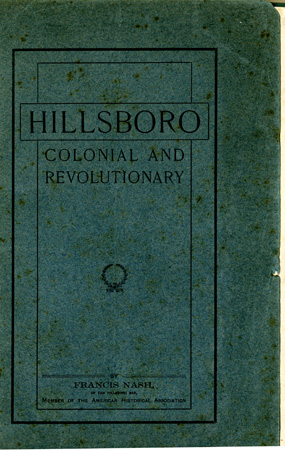 Orphaned at an early age, Frank Nash and his sister Mary went to live at the Nash-Kollock school in Hillsborough, where he received his early schooling from his aunts, Sally and Maria Nash. (These early years in his grandfather's old home are perceptively described in Ladies in the Making [1964], an account of the Nash-Kollock school written, at Frank Nash's suggestion, by his second wife, Ann Strudwick Nash.) He later attended Ralph Henry Graves's preparatory school at Graham.

After brief employment in a Petersburg, Va., tobacco factory, he went to work in a wholesale grocery in Tarboro, reading law at night with Judge George Howard and Joseph Blount Cheshire (later Episcopal bishop of North Carolina). In 1877 he was licensed to practice and joined Judge Howard's office as a partner. Nash was elected mayor of Tarboro in 1881 and served for four years. He also was presiding judge of the Edgecombe County criminal court from 1882 to 1886. Two successive breakdowns in health forced him to retire almost entirely from his legal practice, and in 1894 the Nashes returned to Hillsborough, where Frank Nash remained for twenty years.

Although writing as an avocation was not new to him (he had in 1890–91 published a series of articles on "Judicial Evolution" in the Albany Law Journal ), Nash now began to write in swift succession a series of historical romances—"Belleville," a story of the Reconstruction period (1897–98); "The McTravis Sketches" (1898); "A Lawyer's Mistake" (1899); and "Wiolusing," a sequel to "Belleville" (1900–1901). At his death he left a lengthy manuscript of the romance, "Love's Revenge." Like various other members of his family, Nash wrote gracefully, distinctively, and seemingly without effort. His literary output, excluding legal opinions, was a massive one, covering an exceptionally wide range of materials—genealogy (in which he became increasingly interested in later years), Hillsborough and Orange County history, local biography, and religious and political essays. His Hillsboro: Colonial and Revolutionary (1903; reprint, 1953) brought together a valuable series of articles printed originally in the Charlotte Observer and republished in the North Carolina Booklet. It remains the only publication of its kind on Hillsborough history. In addition, Nash published a portion of a projected Orange County history, contributed a notable group of twenty-three biographical articles (chiefly on early Hillsborough figures) to Samuel A. Ashe's Biographical History of North Carolina, and prepared five additional sketches for a supplement to Ashe that remains unpublished. Also unpublished is the greater portion of his extensive collection of materials for a history of the Strudwick family, as well as a sizable group of unrelated articles and addresses on dueling, Prohibition, church history, and other topics.

Nash did much of his Hillsborough writing in "a little columned two-room office, shaded by mimosa trees," standing at the head of old Cedar Walk and used for decades by the Nash and Strudwick families. He had inherited "The Office" (still standing) from his aunt, Maria Nash, and in later years used it as a combined dwelling house and office.

From May 1907 to May 1911 Nash served as mayor of Hillsborough, and during his term the town's first concrete sidewalks were laid and plans for a public library began to evolve. From 1910 to 1914 he was attorney for Orange County. An ardent Presbyterian and a vigorous prohibitionist, he served as an elder in the Hillsborough Presbyterian Church and for years led the antiwhiskey ("anti-jug") forces in his county. He also was president of the North Carolina Sons of the Revolution, a charter member of the North Carolina Bar Association, second vice-president (1913–14) of the American Bar Association, and chairman of the Democratic executive committee of Orange County.

In 1915, at age sixty, Nash was elected state senator from the Eighteenth District. In 1918 he was appointed assistant attorney general for North Carolina, a post he filled with distinction until 1931. As Judge John J. Parker observed, "He was a sort of Supreme Court himself," largely owing to the many opinions he had to write in the enforced absence of Attorney General J. S. Manning.

Nash was married twice. His first wife was Jessie Powel Baker of Tarboro (1857–9 July 1896), the third daughter of William S. and Sally Baker, whom he married on 27 Nov. 1878. The couple had three daughters: Susan, Sally, and Catherine Staton. In 1920 he married his cousin, librarian-author Ann Spotswood Strudwick (5 Aug. 1878–20 Sept. 1969), the daughter of lawyer Robert Strudwick of Meadowside, near Hillsborough, and his second wife, Rosaline Brooke Spotswood of Petersburg, Va.

In 1931 Frank Nash was appointed clerk of the North Carolina Supreme Court, but he died in Raleigh the following summer. Both he and Ann Strudwick Nash were buried in the new town cemetery in Hillsborough. The only known photograph of Frank Nash appears in the sesquicentennial publication of the Hillsborough Presbyterian Church, One Hundred and Fifty Years of Service (1966).