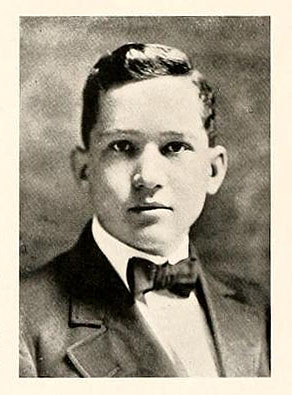 Eugene Irving Olive, clergyman and college administrator, was born in south-western rural Wake County, the son of William Johnson and Ellen Bland Olive. He received his early education in the Wake County schools and at Buies Creek Academy, from which he was graduated in 1906.

For one year (November 1941–November 1942) he was editor of the Biblical Recorder, the weekly journal of North Carolina Baptists, and for eighteen months (1945–46) he was on leave from the Wake Forest pastorate to solicit financial support for the expansion of Wake Forest College on its old campus. As much or more than any other denominational leader in the state, Olive was instrumental in appraising and implementing the offer of the Z. Smith Reynolds Foundation to move Wake Forest College from its century-old site at Wake Forest, N.C., to the new and modern Reynolda campus in the western section of Winston-Salem (1956).

Olive had resigned his pastorate in Wake Forest in mid-1947 to become director of the college's public relations and alumni activities. In that post he managed innovative files and organizations of alumni, not only in North Carolina but also in adjacent states. He was, in effect, assistant president of the college because of the precarious health of President Thurman D. Kitchin. Olive represented the college at many of the conferences and committee meetings held to consider the offer of the Reynolds Foundation. These discussions culminated in a special session of the North Carolina Baptist State Convention's Council on Christian Education held at the Wake Forest campus on 11 Apr. 1946, at a subsequent special joint session of the council, and at the convention held in Greensboro on 30 July.

As plans for the new campus began to materialize, Olive moved to Winston-Salem (1952), and, while continuing his aggressive alumni leadership, was virtually the administrator of the college. Those who knew of his work praised him for his leadership and wise planning during those formative years of the new campus operation.

Olive also played a key role in the trustees' decision to invite Harold Wayland Tribble, of Andover Newton Theological Seminary, Newton Center, Mass., to become the new head of the college. Tribble, who had received an honorary doctor of laws degree from Wake Forest in 1948, became president in mid-1950, succeeding Dr. Kitchin, who had retired that spring after serving for twenty years.

It was Olive who initiated and negotiated the sale (1953) of the old Wake Forest campus to the Southern Baptist Convention as the site of the projected Southeastern Baptist Theological Seminary. His next four years of combined service as director of public relations and of alumni activities centered around enlisting the support of graduates and friends for the new campus. His efforts led to a successful conclusion in 1956, when the new Reynolda campus in Winston-Salem was occupied. From 1955 until his retirement in 1961, Olive devoted himself almost exclusively to alumni affairs, while continuing to edit the Wake Forest Magazine and to make many other valuable contributions to the college.

In addition, he wrote frequently for the Biblical Recorder, for various publications of the Sunday School Board of the Southern Baptist Convention, and for periodicals of the American Baptist Publication Society. His capping work was the compilation and editing of the comprehensive Wake Forest Alumni Directory (October 1961), which contained an alphabetical and geographic roster of students from 1834 to 1960 and a listing of recipients of honorary degrees during the same period.

On 29 June 1926 Olive married Iva Lanier Pierson of Raleigh. They had one daughter, Emily Caroline (Mrs. W. C. Rankin). After his retirement, he continued to live in his home on the Reynolda campus of Wake Forest College and spent much of his time implementing a program (insurance and other areas) for retired ministers, especially alumni of Wake Forest College.

Those who appraised Olive's more than half-century connection with Wake Forest spoke of his loyalty and energy in behalf of the college. It has been said that "he was more widely known and more universally beloved than any individual connected with the College in the Twentieth Century." He died in Winston-Salem and was buried in Forsyth Memorial Park.