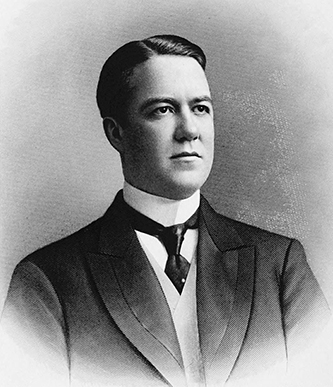 Rufus Lenoir Patterson, Jr., inventor and businessman, was born in Salem, the son of lawyer, planter, and paper mill owner Rufus Lenoir (1830–79) and his second wife Mary Elizabeth Fries Patterson (1844–1927), the daughter of textile pioneer Francis Fries. He attended the Moravian Boys School and the Winston graded school, worked briefly for the Roanoke and Southern Railroad, and in 1889 enrolled at The University of North Carolina.

Patterson left the university after one year to work with William H. Kerr, an inventor of Concord, who manufactured a machine to produce tobacco bags. In 1891 Patterson traveled to England to introduce Kerr's machine and remained there two years to study machine design. After his return in 1893, he divided his time between Baltimore, Md., where Kerr had established his firm, and Durham, where Patterson was associated with the Golden Belt Manufacturing Company, the firm that produced and operated the Kerr bagging machines.

In 1893 Patterson organized the Automatic Packing and Labelling Company to develop his first invention, the Patterson Packer, a machine that automatically weighed, packed, stamped, and labeled smoking tobacco. This machine brought Patterson to the attention of James B. Duke of the American Tobacco Company. After viewing the Patterson Packer, Duke reportedly said, "Ding it, your machines are all right, but I also must have you." In 1898, at age twenty-six, Patterson joined the New York office of Duke's firm as supervisor of all its machinery, including his own packer. He became secretary of the company in 1900 and vice-president in charge of manufacturing in 1901.

In 1900 Patterson organized the American Machine and Foundry Company, a subsidiary of the American Tobacco Company, and in 1901 established two other corporations, the International Cigar Machinery Company and the Standard Tobacco Stemmer Company. When American Machine and Foundry became an independent corporation in 1912, Patterson remained president; he held that position until 1941, when he became chairman of the board of directors. By 1920 American Machine and Foundry and its subsidiaries produced must of the machinery used in the tobacco industry, including the automatic cigar maker developed by Patterson at a cost of $5 million. The company then diversified into other areas of automatic packaging, beginning with the standard bread wrapper in 1924. By 1935 Rufus Lenoir Patterson was one of the eight highest-paid executives in the country.

Although he lived most of his later years in New York City, Patterson remained loyal to his native state and was an active member of both the Southern Society and the North Carolina Society. In 1930 he joined with John M. Morehead in presenting the Morehead-Patterson Bell Tower to The University of North Carolina. In 1925 Patterson was decorated with the French Legion of Honor in recognition of his service as chairman of the Fourth Liberty Loan Drive and in 1935 was awarded an honorary doctor of laws degree by The University of North Carolina.

In November 1895 he married Margaret Morehead, granddaughter of Governor John M. Morehead. They had a son Morehead, who succeeded his father as president of American Machine and Foundry, and a daughter, Lucy Lathrop (Mrs. Casimir deRham). A portrait of Patterson, painted by Sir William Orpen in 1920, hangs in the Rufus L. Patterson Tobacco Engineering Center in Richmond, Va.

I so enjoyed reading about my

I so enjoyed reading about my ancestor & am so blessed to have been part of the family. I was named after my great aunt Margaret Morehead Patterson.