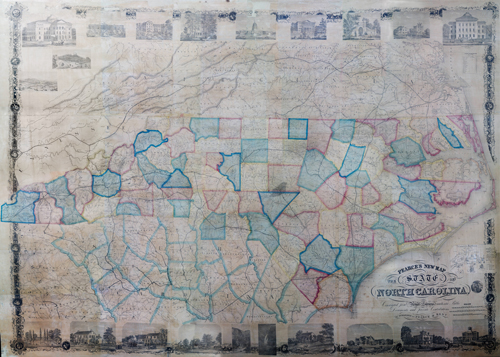 Samuel Pearce, cartographer, was born in St. Mary's Parish, Truro, County Cornwall, in Great Britain. The fourth son of a saddler, John Pearce, and his wife Sarah Salmon Pearce, he was probably educated at the grammar school in Truro. At an early age Pearce came to the United States and settled briefly in Virginia, where he was ordained to the ministry in the Methodist church. From 1840 to 1845 he was assigned to various circuits in the North Carolina Conference, and in 1846 he was appointed to the Hillsborough Circuit, Raleigh District. In 1848 he ended his days as a circuit rider (though he remained a Methodist pastor all his life) by "locating" in Hillsborough, where he occupied the house formerly belonging to Signer William Hooper. Pearce opened a school in Hillsborough in 1848 and a bookstore in 1851. As a bookseller he acted as agent for publishers in Boston, New York, Richmond, and Charleston and eventually was one of the principal distributors for Calvin H. Wiley's North Carolina Reader.

Through Wiley, Pearce became interested in producing an authoritative map of North Carolina. As early as 1852 Wiley and Pearce, with William Dewey Cooke, began gathering data for their projected map, but by 1854 Wiley withdrew from the project. Three years later Cooke and Pearce produced their map, but under the title of Cooke's New Map of North Carolina, Pearce's name appearing without explanation in the lower right corner of the map. When in 1858 Cooke had the map republished by the well-known firm of Joseph H. Colton in New York, he dropped Pearce's name entirely. Two years later Cooke left North Carolina for Georgia, and Pearce determined to bring out his own map of the state. At 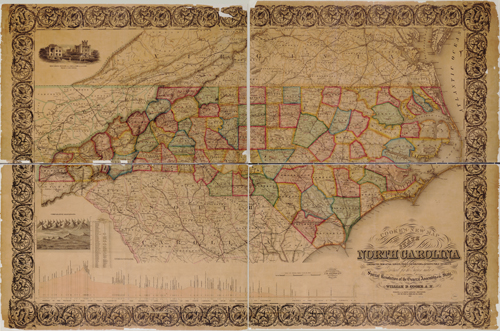 the end of the Civil War, Pearce announced his forthcoming map in the Hillsborough Recorder from early October 1865 until the end of February 1866. His design called for the map to measure 48 by 70 inches and to be ornamented in the borders with North Carolina vignettes and portraits of such notables as President Andrew Johnson and Governor David L. Swain. When the map appeared, it did so under the title Pearce's New Map of the State of North Carolina, measured 58 by 83 inches, and was decorated in the border with vignettes of North Carolina and Virginia buildings and scenes lithographed by Harline and Hensel of Philadelphia and printed by Hayes and Zell. The decorations included in an inset the illustration from John H. Wheeler's 1851 Historical Sketches of North Carolina of Theodor de Bry's depiction of the landing of the English at Roanoke Island in 1584. Pearce's partner in financing publication of the map, printed in soft, bright tones, was R. W. Best of Raleigh. The year of publication does not appear on the map; Levi Branson's Business Directory for 1867/68 reports the publication date as 1860, surely a misprint for 1866. The map, mounted on a roller, was ideal for use in the public schools.

For the next few years Pearce was obliged to bring out new editions as the General Assembly erected new counties (Dare, 1870; Swain, 1871; Pamlico and Graham, 1873). His edition of 1871 (copyrighted in 1870) appeared under the same title as the first edition but was reduced in size to 39 1/2 by 55 1/2. This edition was printed by H. H. Lloyd and Company of New York and included as insets a map of the United States and the eastern and western hemispheres. This edition was financed by Pearce alone, apparently from proceeds of sales of the first edition.

When it became necessary to bring out another edition almost immediately after release of the second, Pearce turned to Alfred Williams, the Raleigh stationer, for help in financing it. Williams thus acquired a share of the copyright. The 1872 edition (copyrighted in 1871) was again printed by H. H. Lloyd and Company and was further reduced in size to 30 1/2 by 58 inches. The U.S. map and the hemispheres were replaced by comparative data from the 1860 and 1870 censuses and points of altitude on the railroads of the state. As had the 1871 edition, the 1872 edition retained the original title of 1866.

Presumably Alfred Williams acquired full title to the copyright he and Pearce jointly owned, for in 1873 he instructed H. H. Lloyd and Son (as the firm was now called) to alter the plates, bringing out a new edition in that year measuring 35 by 60 inches and titled Williams' New Map of the State of North Carolina. This edition is recognizably the work of Pearce, and the title should be understood to signify proprietorship and not authorship. Pearce died of paralysis five years later in Charlotte, where he and his family had moved. His death brought to an end the long line of North Carolina's independent, local cartographers that had commenced with John Lawson in 1709 and had included Edward Moseley (1733), William Churton and John Collet (1770), Jonathan Price and John Strother (1808), Robert H. B. Brazier (1833), and William Dewey Cooke (1857). Although there were additional maps of the state made by local cartographers, they were produced as part of the cartographers' function as geological officers of the state. Otherwise, authoritative maps of North Carolina were thereafter produced routinely by professional cartographic firms drawing on data gathered by the U.S. Geological Survey.

Of Pearce's family, only the forename of his wife, Mary A., a native of North Carolina, is known. Their daughter, Ann B. J. Pearce, married James W. Turrentine of Orange County in 1863.

Re: "The year of publication

Re: "The year of publication does not appear on the map; Levi Branson's Business Directory for 1867/68 reports the publication date as 1860, surely a misprint for 1866. The map, mounted on a roller, was ideal for use in the public schools."

The Pearce map publication date of 1860 as listed in Branson's Directory is correct. A Salisbury book seller advertised copies (in stock) for sale that year. Advertisements for the map in 1859 newspapers are inconclusive as to whether the map had been published at that time.

As far as "ideal for use in public schools", the General Assembly thought differently. They rejected a petition from Pearce for the State to purchase copies for the common schools. Although the map offers a stunning visual display, it is not a "new" map, but a slightly updated 1833 map, printed from the same plates as the MacRae-Brazier map. The more accurate Cooke map would have been more "ideal" for use in schools.

Re: "Pearce announced his forthcoming map in the Hillsborough Recorder from early October 1865 until the end of February 1866."

That was not for the map shown above, but his map that was eventually published in 1871:
http://dc.lib.unc.edu/cdm/ref/collection/ncmaps/id/450

Thank you for taking the time to post this additional insight and information!