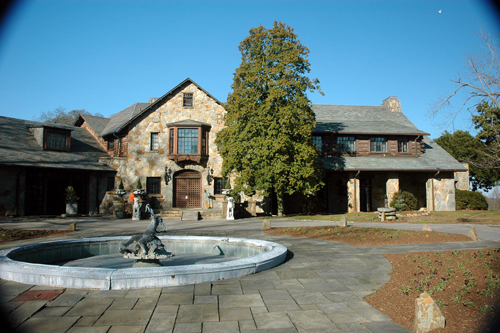 Thomas Jefferson (Jeff) Penn, investment broker, farmer, and philanthropist, was the son of Frank Reid and Annie Spencer Penn of Penn's Store, Patrick County, Va. In 1874 his father moved the family to Reidsville, where he formed a business partnership with his brother, Samuel C. Penn, and established the F. R. Penn Tobacco Company for the purpose of manufacturing chewing and smoking tobacco. Born and reared in Reidsville, Jefferson Penn attended the local schools and the University of Virginia. He then became a salesman for his father's tobacco company and for a time was located on the Pacific Coast. Following the purchase of F. R. Penn Tobacco Company by the American Tobacco trust, Penn decided to become an investment broker and joined the New York Stock Exchange.

In 1912, while in New York, Penn began purchasing land near Reidsville which he named Corn Jug Farm and where he began developing a Holstein dairy herd. Over the next decade he bought additional tracts, bringing the total to six hundred acres. In Buffalo, N.Y., he met Genevieve Schoellkopf von Berg, who became his first wife. After her death he married her cousin Beatrice (Betsy) Schoellkopf, daughter of Arthur Schoellkopf, the developer of electric power at Niagra Falls, on 9 Oct. 1923 in New York. Although he had a house in Buffalo, the Penns chose to live at the dairy farm near Reidsville and began construction of a twenty-seven-room stone and log country home designed by architect Harry C. Ingalls of New York. The property was named Chinqua-Penn Plantation and an additional three hundred acres was added to the original farm. The grounds were landscaped by Gordon Hurleman of Switzerland. Jeff and Betsy Penn embarked on a series of European and world tours, purchasing a number of art objects that they sent to Chinqua-Penn; they gradually accumulated a considerable collection. On the farm Penn began to develop a prize herd of Black Angus cattle and also grew tobacco.

The Penns contributed to a number of local charities. They made major donations to the Reidsville Community Chest, the local Boy and Girl Scout programs, the American Red Cross, the North Scales Street Christian Church, the local Masonic lodge, the Jeff and Betsy Penn Foundation, and the Annie Penn Memorial Hospital. Betsy Penn was particularly interested in the Girl Scouts and was responsible for the creation of the Chinqua-Penn Girl Scout Camp near Reidsville. Jeff Penn was chairman of the county Committee on Economic Development, a member of the Reidsville Industrial Committee and of the county school board, and chairman of the board of directors of the First National Bank of Reidsville. He was a thirty-second-degree Mason and a member of the Oasis Temple of the Order of the Shrine. In 1942 he published a family memoir, My Black Mammy.

After the death of her husband at Hot Springs, Va., Betsy Penn continued community philanthropic work. On 20 Oct. 1959 she gave Chinqua-Penn Plantation to The University of North Carolina, retaining lifetime residence rights. Soon the Betsy-Jeff Penn 4-H Conference Center and summer camp were established on the original Corn Jug Farm property. North Carolina State University administered the conference center and the plantation's agricultural activities, which included a tobacco research station and the herd of Black Angus cattle. Upon the death of Betsy Penn on 21 Feb. 1965 at age eighty-three, the plantation house, the art collections, and surrounding grounds were placed under the care of the University of North Carolina, Greensboro. Just over a year later the estate was opened to the public. Portraits of the Penns were on display at Chinqua-Penn Plantation.

Have roots from North

Have roots from North Carolina in the Winston Salem area where my great great grand father lived during the late 1800s before moving to Fresno California.His name was Green Penn. His son Samuel Penn was my maternal grand mothers father. There seems to be a connection somewhere between these families.Mines which started out in Virginia before
moving on to NC,Ohio,Maryland SC and PA.Just curious!