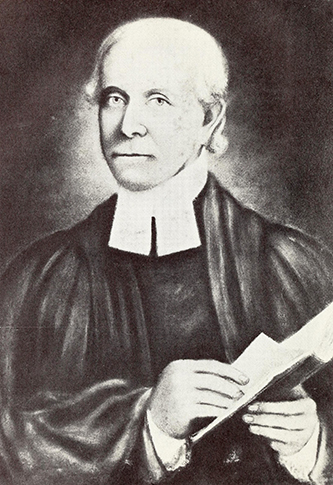 Charles Pettigrew, clergyman, planter, and educator, was born on the Pennsylvania frontier, the sixth of eleven children and the third son of James and Mary Cochran Pettigrew, both immigrants from Northern Ireland. The family possessed some slender means, and James had received a degree of medical education, a combination with which he set out to make his way in the New World. Leaving the exposed Pennsylvania frontier after General Edward Braddock's defeat, the Pettigrews moved to Lunenburg County, Va., where it was apparently decided that Charles was to receive all the education the family could afford. Presbyterian by faith, the father selected clergymen to teach his son, among them James Waddel and Henry Pattillo. From Virginia the family migrated to Granville County, N.C., and eventually to South Carolina, where their wanderings ceased. James Pettigrew was a Patriot during the American Revolution and frequently attended the wounded in spite of his advanced age. Some of the South Carolina family later changed the spelling of the surname to Pettigru.

Charles Pettigrew remained behind in Granville County when his parents moved to South Carolina in 1768. After teaching in a small school for the children of the Macons and the Hawkinses for about seven years, he was appointed by Governor Josiah Martin as schoolmaster at Edenton, an important colonial town. At this time Pettigrew became an Anglican. He served as assistant to the Reverend Daniel Earl at St. Paul's Church and in 1774 went to England, where he was ordained deacon and priest by the bishops of London and Rochester. He returned to Edenton on 20 May 1775.

As the waves of revolution broke over the state, Pettigrew became a moderate Patriot. He preached appropriate sermons to patriotic assemblages but was insufficiently fiery to appease the powerful Blount family, one member of whom seems to have arranged that he be drafted for military service in spite of his clerical standing. Pettigrew served for a few weeks in the spring of 1780 and was then able to secure his release by "having produced Zachariah Carter an able bodied man in his Room." During the war, he was named rector of St. Paul's Church, with which he continued to be loosely affiliated until his death. From 1790 to 1794 he participated in a movement to organize the former Anglican church into the Episcopal Diocese of North Carolina, promoting together with the Reverend Nathaniel Blount four conventions for this purpose. In 1794, at Tarboro, he was elected bishop of the proposed diocese. Unfortunately for the church, he failed to attend the next two triennial conventions at either one of which he would have been consecrated bishop, and at the time of his death there was neither bishop nor diocese in the state.

Pettigrew was more fortunate as a planter. In 1781 he purchased land in Tyrrell County to which he gradually added; eventually he owned two plantations on which he grew rice, wheat, and corn, and whose timber he made into shingles and barrels for sale. His neighbors, the Collins family, formed the Lake Company together with Nathaniel Allen and Samuel Dickinson, draining the swamps, building canals to connect Lake Phelps with the Scuppernong River and thence to Albemarle Sound, and erecting mills and threshing machinery, allowing Pettigrew their use. Beginning with nine slaves who were the property of his first wife, Pettigrew more than tripled their number by the time of his death. From a poor frontier boy, he became the owner of two plantations in North Carolina, eight hundred acres of land in Tennessee, thirty-four slaves, a chapel, and a good house that he built (it was still standing in the 1990s), and he possessed what he described to a cousin as "more than a Competency." 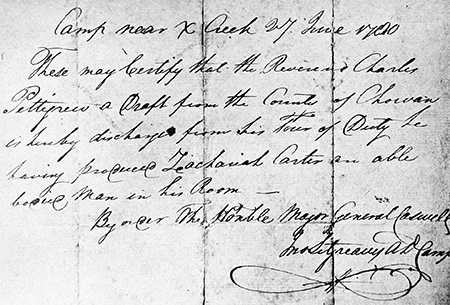 Apparently taught some medicine by his father, Pettigrew considered himself a "quack" and frequently prescribed for friends as well as himself; he intended that his oldest son become a physician. He was interested in education, serving on the first board of trustees of The University of North Carolina until he became disgusted with the rampant deism there. A Federalist in politics, he detested both Thomas Jefferson and Tom Paine. There are extant a number of his sermons, a good deal of his poetry, and some hymns that he wrote, displaying some degree of literary talent.

Pettigrew was twice married, first to Mary (Polly) Blount of Mulberry Hill, an heiress by whom he had two sons: John who died in an epidemic in 1799, and Ebenezer. Polly died in childbirth in 1786. Pettigrew secondly married Mary Lockhart in 1794, an apparently happy union. There were no children. John and Ebenezer were enrolled by their father in the first session (1795) held at The University of North Carolina, and their letters home are among the treasures of the university's archives. Pettigrew also encouraged various nephews to continue their education in the church or in medicine. Pettigrew died of general ill health and was buried in the Blount cemetery at Mulberry Hill by the side of his first wife. His son Ebenezer moved the remains in 1831 to the new family cemetery at Bonarva Plantation on Lake Phelps. A memorial plaque may be viewed in St. Paul's Church. His portrait, in clerical garb, has been reproduced in The Pettigrew Papers, vol. 1.

"The Reverend Charles Pettigrew (ca. 1747-1808), Episcopal clergyman, Edenton. Photograph from the files of the State Department of Archives and History, Raleigh; copied from a photograph owned by Allen P. Pettigrew of Raleigh." Photograph. The Pettigrew papers. Raleigh [N.C.] : State Dept. of Archives and History. 1971. https://archive.org/stream/pettigrewpapers1971lemm#page/n5/mode/2up (accessed May 30, 2013).