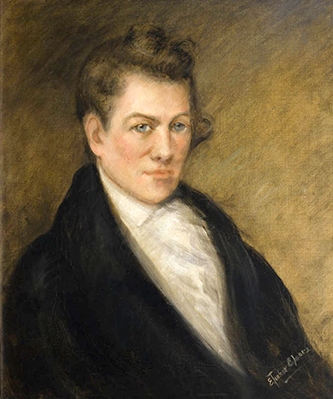 Israel Pickens, lawyer, congressman, governor of Alabama, and senator, was born in Mecklenburg (now Cabarrus) County near Beattie's Ford across the Catawba River. He was the son of Captain Samuel, a slave owner and veteran of the Revolutionary War, and Jane Carrigan Pickens. The family was of French Huguenot descent. Israel was educated under the Reverend John Robinson in a classical school at Poplar Tent Church and studied law at Jefferson College, Cannonsville, Pa.

In 1802 young Pickens moved to Morganton, Burke County, where he began to practice law and soon became involved in the politics of western North Carolina. As a Democrat, he served in the state senate in 1808 and 1809 before his election to three terms in the U.S. Congress from 1811 to 1817. During the War of 1812 he was a staunch supporter of President James Madison's war measures and was a friend and political ally of William R. King, with whom he shared the same "Congressional mess" at Claxton's Hotel on Capitol Hill. Pickens voted with the narrow majority of the House and of the North Carolina delegation for the internal improvements bill passed in late 1816. Earlier he had supported the rechartering of the Bank of the United States, reflecting the tone of his ardent "mountaineer" Democratic outlook. In the final session of the Fourteenth Congress, he was chairman of the committee on public expenditures.

Pickens did not seek reelection and by mid-1818 he joined a stream of North Carolinians moving to the new Alabama and Mississippi territories. He settled in Hale County, Ala., not far from his former fellow congressman-friend from North Carolina, William King. Pickens was appointed a register of the land office, named president of the Tombigbee Bank, and selected as a delegate from Washington County to the convention that voted statehood for Alabama. He was elected governor by "anti-Crawford" forces in 1821 and reelected in 1823. King, also a member of the statehood convention, won a seat in the U.S. Senate the year after Pickens became governor. Much credit for organizing the machinery of government for the state and chartering the University of Alabama is given to Pickens. In 1826 he was named to fill a vacancy in the Senate and served from February to November, when a successor was chosen. By then he was suffering from tuberculosis and declined a federal judgeship for the Alabama district; instead, he went to Cuba where he hoped his health might improve. He died at Matanzas, Cuba, however, and was buried there. His remains were later moved to a family cemetery near Greensboro, Ala.

Pickens had other interests as well. It probably was merely as a hobby that he engaged in scientific research, but he invented a lunar dial.