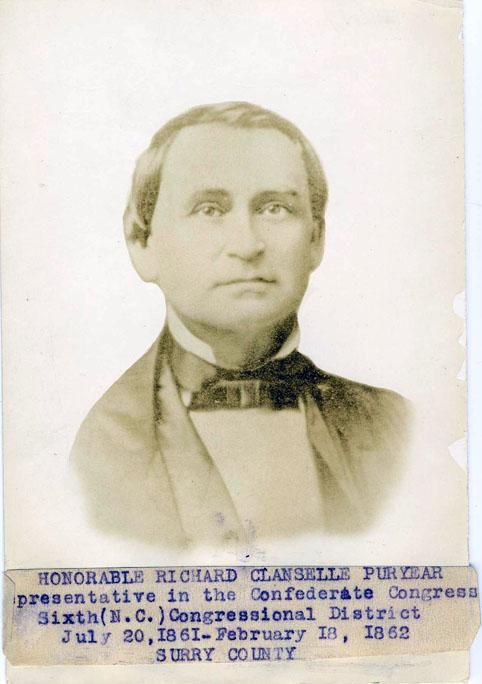 Richard Clanselle Puryear, planter and congressman, was born in Mecklenburg, Va., the son of Richard and Sarah Shepherd Clanselle Puryear, both of French ancestry. About 1811 the family moved near Brookstown in Forsyth County, N.C., and began farming. The father died shortly afterwards, but young Richard received a good education, probably at home. He at first began studying medicine but soon afterwards determined to become a planter. He bought two tracts of land totaling 700 acres in Yadkin (now Surry) County and chose to reside on his estate, Shallowford, near Huntsville. Puryear became moderately successful; the census of 1860 listed him as owning thirty-two slaves and real estate worth $56,000.

Locally, Puryear served as a colonel in the state militia and as county magistrate. In 1838, 1844, 1846, and 1852 he was elected to represent Surry County in the House of Commons, and in 1840 he was sent to the state senate. The legislative journals show him to have been a dependable though unassertive legislator; nevertheless, his five terms of faithful attention to local problems seem to have entrenched him politically, for in March 1853 he went to the U.S. House of Representatives as a Whig. He was returned in 1854 but lost his bid for a third term because of his "unsoundness" on Southern rights in general and his opposition to the pro-South Kansas-Nebraska Act in particular.

During the secession crisis of 1860–61 Puryear favored the Union until Lincoln's call for troops to quell the Southern "rebellion" alienated almost all North Carolina Unionists. After secession a caucus of former Unionists, of which he was a prominent member, secured Puryear's election by the secession convention as a delegate to the Confederate Provisional Congress. During his year in this capacity he did little but attend and vote regularly. He obviously disliked the idea of national taxation, for he voted consistently for lower taxes and more exemptions. Otherwise he should be considered a strong supporter of the other war measures coming before Congress. He did not seek reelection, possibly because he felt that for the sake of victory the Confederate leadership would be willing to "build up a Monarchy upon the remains of our glorious Republic." After the war Puryear was a delegate to the Peace Congress in Philadelphia. At home he continued his planting activities until his death. He was buried in the family cemetery at Shallowford.

On 21 Nov. 1835 Puryear married Elizabeth Ann Clingman, daughter of Jacob and Jane Poindexter Clingman and sister of Thomas L. Clingman, whose ancestors had lived in Yadkin County since before the American Revolution. Their children were Jane Amanda, Sarah Ellen, Henry Shepherd, Elizabeth Patillo, Richard Clingman, and Thomas Lanier. The family was Episcopalian. Puryear's contemporaries considered him to be "a man of strong personality" and the "personification of what is peculiar and best in the character of a North Carolina gentleman of the old school."