John Robert Raper, botanist of international note, was born in Davidson County, near the hamlet of Welcome. He was the youngest of eight children—seven sons and one daughter—of William Franklin (Frank) and Julia S. Crouse Raper. "Mr. Frank," as the father was known to friends and neighbors, was a farmer who with the help of his sons raised tobacco and other crops; though not prosperous, he was highly respected in the community. In the last decades of his life he was not in robust health, and as the older sons left home, first to attend high school and then college, a small dairy herd replaced tobacco as the principal source of farm income. Much of the responsibility for tending the cattle fell to John during his high school years. Mrs. Raper was an efficient manager, and as the mother of a large family she still found time to devote to her children and to instill in them strong moral and spiritual values. Her husband gave firm support in the rearing of the children, who received every encouragement other than financial aid in their quest for an education. 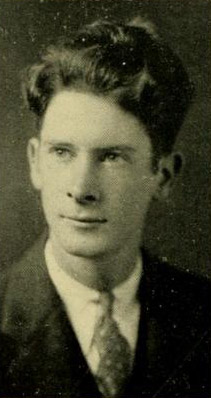 The Rapers' home was located in the vicinity of three churches—Friedburg and Enterprise, both Moravian, and Mount Olivet, which was Methodist. The family worshiped at each, and as John Raper himself once noted, "often [at] all three on the same Sunday." Mrs. Raper taught a Sunday school class for many years, and the family's church memberships were divided between the two denominations.

It was amid such surroundings and in such a community that John Raper was reared. His formal education began in a three-room neighborhood elementary school. After completing the fourth grade he attended Arcadia School, a consolidated elementary-high school that had been recently built, largely through the efforts of Frank Raper and on land that he had donated. John entered The University of North Carolina in the fall of 1929. In high school English grammar and literature and French had been favorite subjects, with little time left for other things after farm chores were completed. But in those free hours music became his recreation and his hobby.

During the last quarter of his freshman year in Chapel Hill Raper was enrolled in "Introductory Botany," a course taught by John Couch, and it marked the beginning of his serious interest in science. This was, in fact, his first formal instruction in science, but more important it carried a spark that kindled his interest. Courses in botany and zoology taken during the sophomore year sustained and heightened this interest, and for the junior year he was offered a teaching assistantship in botany. Raper was graduated in 1933 with a bachelor of arts degree and in 1936 with a master of arts. His master's thesis, "Heterothallism and Sterility in Achyla and Observations on the Cytology of Achyla Bisexuales," bears the approval signatures of both Couch and William C. Coker.

Raper continued his graduate study at Harvard, where his mentor was Professor William Weston, and in 1939 he was awarded the doctorate and a second master's degree. He spent the academic years 1939–40 and 1940–41 as a research fellow at the California Institute of Technology. In the fall of 1941 he joined the Department of Botany at Indiana University as an instructor and remained there until 1943, when he was called to the Manhattan Project in Oak Ridge, Tenn.; he worked at Oak Ridge for three years as a research biologist. With the end of World War II, he was invited to join the faculty of the University of Chicago as an assistant professor. From 1946 to 1954 he rose rapidly in rank to professor and then in the latter year accepted an offer to return to Harvard, where from 1970 until his death four years later Raper was chairman of the Department of Botany.

Honors and recognition came to John Raper in full measure. In 1960–61 he held both a Guggenheim Fellowship and a Fulbright Research Award; the same year he was a guest research professor at the Botanisches Institut der Universität in Köln, Germany. In 1967 he was visiting professor of genetics at the Hebrew University, Jerusalem, and with his wife (also a scientist) he had planned to spend 1974–75 as sabbatical leave at the Rijksuniversiteit te Groningen, Netherlands. Raper was a member of the American Academy of Arts and Sciences, and in 1964 he was elected to the National Academy of Science. He held membership in numerous scientific societies such as the American Society of Naturalists, the Botanical Society of America, and the Genetics Society. In 1958 he was president of the Mycological Society of America.

During the twenty years of teaching at Harvard Raper continued his research on the complicated genetics and physiology of Schizophyllum and related fungi. He taught both graduate and undergraduate courses and guided the doctoral research of a number of students. His major published work was Genetics of Sexuality in Higher Fungi, but in addition he was the author of over one hundred publications in related fields.

Friends knew of Raper's love for and appreciation of music, but perhaps few of those who came to know him after his student days realized the extent of his talent. As a very young boy he began to play the trumpet, due at least in part to his Moravian heritage; this is understood when one is reminded of the beautiful and remarkable brass choirs so frequently used in the worship service of Moravian congregations. He was a member of The University of North Carolina's band, symphony orchestra, and glee club, and on the professional level played with the North Carolina Symphony Orchestra. For a brief period he seriously considered music as a profession.

Raper died in Peter Bent Brigham Hospital after a brief illness. A few years earlier evidence of a heart murmur had been detected, but the cause of his final illness eluded doctors at the time. He was survived by his wife, the former Carlene Marie Allen, whom he had married on 9 Aug. 1949, by their children, Jonathan and Linda, and by William, his son by a previous marriage to Ruth Scholz. A memorial service, conducted in Harvard's Memorial Church on 30 May, was filled with the music of composers he loved—the Gabrielis, J. S. Bach, Monteverdi, and Vittoria. Perhaps John Raper is best characterized in a tribute paid by Kenneth, the brother a few years older and himself a distinguished scientist and member of the National Academy of Science, when he said, "John was withal a very generous and talented man with a complex personality—sometimes serene, often impulsive, occasionally quixotic, but never dull! He was a good man, husband and father and, fortunately, for seven of us a younger and beloved brother."