William Paul Roberts, Confederate soldier, legislator, and state auditor, was born in Gates County, the son of John Smith and Jane Gatling Boyt Roberts. He received little formal education other than in local schools a few months out of each year and one year at a small private school at Harrellsville. At the outbreak of the Civil War he was teaching in a small local school, and on 10 June 1861 he enlisted for the duration of the war in Company C, Nineteenth North Carolina (First Cavalry) Regiment, as orderly sergeant. Roberts quickly rose to the rank of second lieutenant on 30 September, and on 14 Mar. 1862 his regiment was present at the Battle of New Bern but was not engaged. Afterwards his company remained on detached picket duty in the district of Pamlico and participated in the attack on Washington, N.C., on 6 Sept. 1862. It then moved to Virginia and took part in General James Longstreet's Suffolk campaign, after which it rejoined its regiment and became a part of Robert E. Lee's Army of Northern Virginia, serving in the cavalry brigade of Lee's son, W. H. F. Lee. 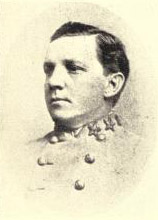 Roberts became first lieutenant of his company to rank from 1 May 1863 and then advanced to captain, to rank from 13 Aug. 1862. He fought in the Battle of Brandy Station, the Gettysburg campaign, the "Buckland Races," and the Wilderness campaigns of 1864. Meanwhile, he was commissioned major of the Nineteenth North Carolina on 18 Feb. 1864, and later, during the initial struggles for possession of the railroads into Petersburg, Va., Roberts was commissioned colonel of the regiment on 19 August, to rank from 23 June 1864. Scarcely a week after his promotion he participated gallantly in the Battle of Reams's Station, on 25 August, where he dismounted his regiment and led it against an entrenched position of Union troops, which he captured along with numerous prisoners.

He continued to command the regiment until, in recognition of his bravery and distinctive leadership, he was commissioned brigadier general on 23 Feb. 1865 to rank from 21 February (confirmed on 23 February) and was even personally presented the gauntlets of General Robert E. Lee as a sign of the commanding general's recognition of his valor. At age twenty-three, he had the additional distinction of being the youngest commissioned general officer of the Confederacy. Roberts was given command of a small brigade of North Carolina cavalry in W. H. F. Lee's division, consisting of the Fifty-ninth North Carolina (Fourth Cavalry) and the Seventy-fifth North Carolina (Seventh Cavalry), also known as the Sixteenth North Carolina Battalion. 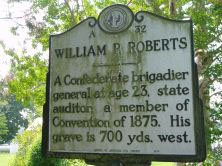 On 1 Apr. 1865 Roberts's new command was assigned the task of maintaining contact between the extreme right of the Confederate defense lines around Petersburg and the left flank elements of General George E. Pickett's Confederate troops holding the strategic crossroads of Five Forks, a distance of several miles in which Roberts simply did not have enough men for an adequate defense line. Powerful Union forces, which outnumbered Roberts many times over, attacked and quickly over-whelmed his thinly spread brigade in what later turned out to be a disaster to Pickett's Confederate troops at Five Forks. The remnants of Roberts's brigade participated in the retreat to Appomattox and during the surrender of Lee's army at that place Roberts's command pitifully contained only five officers and eighty-eight men who were not killed or captured in the fighting or the retreat. Roberts himself was paroled there and returned home to Gates County.

Shortly afterwards he married Eliza Roberts, daughter of Mills and Margaret Bond Roberts (of no kinship to the general), and although they had two children, both died in childhood. Later the couple adopted Mrs. Roberts's niece, Eugenia Walton. General Roberts represented Gates County in the constitutional conventions of 1868 and 1875. In 1876 he won a seat in the state legislature. Roberts was elected state auditor in 1880 and reelected in 1884; he declined a third term in the election of 1888. Afterwards, President Grover Cleveland named him consul to Victoria, British Columbia, a post he held for a number of years before returning to Gates County to once again take up farming. He died in Norfolk, Va., and was buried in Gatesville.

Walter Clark, ed., Histories of the Several Regiments and Battalions from North Carolina (1901).