William Royall, Baptist minister and educator, was born in Edgefield District, S.C., the son of William and Mary Ann Riley Royall. His great-grandfather, William Royall, settled on James Island near Charleston, S.C., in the latter part of the seventeenth century on a grant of land obtained from the Crown. For a short time young Royall also lived on James Island. At age ten he was ready for high school and his parents moved to Charleston. There, under the influence of Dr. Basil Manly, Sr., Royall made a profession of religion and joined Manly's church at age eleven.

He began the study of languages under Joseph Lee and attended classes at the Furman Manual Labor and Classical Academy, in Fairfield District, S.C., where his uncle, William E. Bailey, was principal and Dr. William Hooper (later president of Wake Forest College) was head of the theology department. From this school Royall entered South Carolina College in Columbia at age fifteen. After graduation in 1841 he read law under Attorney General Henry Bailey and taught classes in Bailey's academy in the morning to support himself. As an active church member he was soon under the influence of Drs. J.L. Reynolds and Thomas Curtis, both pastors in the city. Royall decided to enter the ministry and moved to Mount Pleasant, S.C., where he was in charge of a school and studied theology under Curtis and Dr. William T. Brantly. He supplied the pulpit for Brantly on several occasions and was ordained in Charleston in 1843. 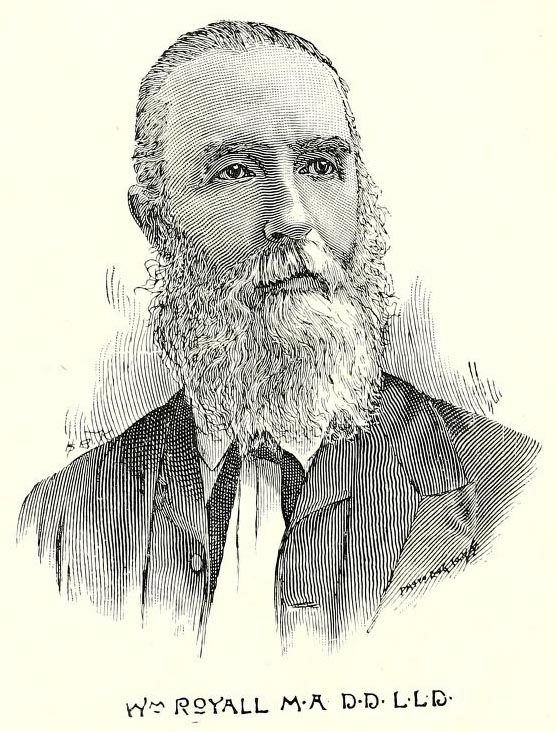 In 1844 Royall took charge of three country churches in Abbeville and Edgefield districts, S.C. He then served churches in Georgia for two years before moving to Ocala, Fla. In Florida he assisted a number of missions and remained there until 1855. His own poor health and that of his family after suffering from malaria prompted him to accept a call to become principal of the preparatory school of Furman University. This was the beginning of his great work in the field of education. "From this period he never quit the recitation-room," according to one biographer.

In 1859 Royall became professor of languages at Wake Forest College. His method was analytical, logical, and philosophical and, according to F.P. Hobgood, "created great enthusiasm in his own department" and its "stimulating and quickening influence was felt by the entire college."

After the Civil War began, Wake Forest College closed for lack of students and Royall was appointed chaplain of the Fifty-fifth Regiment of North Carolina Troops. He served from 20 May 1862 to 24 July 1863, when he resigned because of a physical disability. Taking notice of his appointment, the Biblical Recorder described him as a "finished scholar, an interesting preacher, and a man of industry and energy." It predicted that he would do much good in his work as chaplain.

In 1866 Royall and three other professors (including his son, William Bailey) reopened Wake Forest College and began to prepare to instruct new students. Royall organized the course work into a flexible system of schools to replace the inflexible prewar curriculum. In 1870 he resigned his professorship to become president of the Raleigh Baptist Female Seminary. Failing health caused him to withdraw from that position, but after a period of rest he accepted the presidency of Louisburg Female College.

In 1874 he moved to Texas and became president of Baylor Female College in Independence. While in Texas, Royall also taught in seminaries in Bryan and Calvert. He moved to San Antonio in 1878 and remained there until 1879, when he accepted the presidency of Jonesboro College, Tenn. During his eighteen-month stay he also served the Baptist church in Jonesboro.

In June 1880 he was elected professor of modern languages at Wake Forest College. In this post he taught French, German, and English and assisted in the School of Moral Philosophy. In 1888 the growth of the college required the establishment of a separate Chair of English, which Royall was chosen to fill. In 1889 The University of North Carolina awarded him an honorary doctor of laws degree. Earlier, in 1868, he had received an honorary doctor of divinity degree from Furman University.

While still engaged in the field of education, Royall assisted from time to time with interim pastorates in the Wake Forest Baptist Church and served several pastorates in the area around Wake Forest. He was the author of a book, A Treatise on Latin Cases and Analysis, published in New York in 1860. One of his sermons was published in 1866, and he wrote numerous articles, essays, and sketches for the Wake Forest Student magazine.

Royall was married on 12 Oct. 1843 to Elizabeth Bailey, the oldest daughter of Dr. Robert S. Bailey. She died on 24 July 1892. The couple had three sons—William Bailey and two others, and two daughters, Mary (Mrs. F.P. Hobgood) and Mrs. W.C. Powell. Royall was spending the holidays with his daughter and son-in-law in Savannah, Ga., when he died suddenly. His funeral was held in the Wake Forest Baptist Church with friends, former students, and his son giving sketches of the influence of his life on theirs. He was buried in the local cemetery.