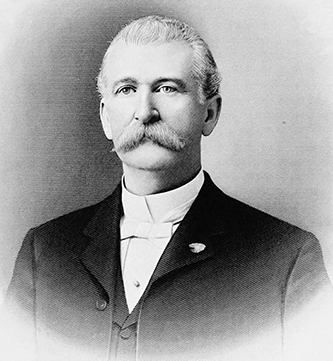 Hugh Reid Scott, attorney and banker, was born in rural Rockingham County, the son of William and Rhoda Reid Scott. His father, a planter and merchant, was a member of the Court of Pleas and Quarter Sessions; his mother was the sister of Governor David S. Reid. Young Scott attended a local old-field school and the Reidsville Academy, where he was taught by Frank P. Hobgood. After a busy student career that included debating and other activities, he was graduated from Wake Forest College in 1875. He then studied law under Chief Justice Richmond Pearson at Richmond Hill, Yadkin County, and received a license to practice in 1877.

Scott established a practice in Wentworth and remained there for seven years before moving to Reidsville, where he spent the rest of his life. He was elected to two successive terms (1881–85) in the North Carolina Senate. Although he had no banking experience, he was chosen in 1895 to organize the Citizens' Bank of Reidsville, which prospered under his leadership. Returning full-time to his law practice in 1909, he continued serving as legal counsel to businesses and businessmen. His banking and legal services were predicated on what he termed a policy of "Safety first, and as far as consistent with safety, profits." He also held extensive property and farming interests.

A man of wide reading interests, Scott owned what was considered to be one of the best legal libraries in his part of the state. In addition, he collected books, pamphlets, periodicals, and newspapers concerning North Carolina and North Carolinians. In 1946 his law library was presented to the courthouse of Rockingham County, whereas many of his personal papers and much of his North Carolina material were later given to the University of North Carolina at Chapel Hill.

When he was fifty-three Scott married Flossie Brewer, and they were the parents of one child, Cecilia (Mrs. William Hester). He was buried in Greenview Cemetery, Reidsville.