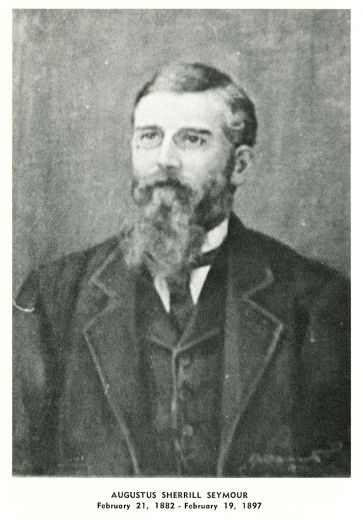 Augustus Sherrill Seymour, federal judge, state judge, and legislator, the scion of a distinguished family including Governor Horatio Seymour, was born at Ithaca, N.Y., the son of Mary Sherrill and Hezekiah C. Seymour, state engineer of New York in 1850, prominent contractor, builder of railroads, and chief engineer of the New York, Lake Erie, and Western railroad. Following graduation from Hamilton College in 1856, he took law courses there, was admitted the next year to the bar, and began to practice in New York City. In 1864 he moved to New Bern and was admitted to the North Carolina bar in 1866 at the first term of the superior court after the Civil War.

Although Seymour was a carpetbagger in the South amid difficult times, his marked ability, honest and sympathetic character, and considerate and kindly personality endeared him to the New Bernians who returned home after the war. During corruptible eras his reputation remained untarnished. A staunch Republican, Seymour became city attorney and chairman of the judiciary committee in 1867. In May 1868 he was elected to the North Carolina House of Representatives for its extra session during 1 July–24 August. That fall he was appointed judge of the Craven County criminal court but resigned and went back to the state house for its regular session from 16 Nov. to 12 Apr. 1869. Elected a state senator in 1872, he became an influential member of the judiciary committee and the special committee on constitutional amendments.

Named a judge of the superior courts in 1874, Seymour served ably during the term ending in 1882. His sense of justice tempered with mercy made him so universally admired that his appointment as judge of the U.S. District Court by President Chester A. Arthur in 1882 met with general approval. He held the post until his death. He was a Presbyterian, Mason, and member of several collegiate societies. Both his alma mater and The University of North Carolina conferred upon him the LL.D. degree. His writings included Seymour's Sixth and Seventh Digests of North Carolina Reports.

On news of his death, the state supreme court adjourned in his memory. The Raleigh News and Observer commented: "From the day of his elevation to the bench, Judge Seymour eschewed politics, and grew to be a learned, upright and just judge, esteemed by the bar of all shades of political opinion. He was a man of scholarly tastes, had traveled extensively, and was one of the most accomplished men in the state." The New Bern Weekly Journal wrote: "He was regarded by his profession as one of the most learned and impartial judges on the bench. Socially Judge Seymour was held in high esteem, especially in this his own city. His manner was always courteous, and he was interested in everything going on. His loss will be very keenly felt by the entire community."

In 1863 Seymour married Nancy O. Barton (26 July 1838–26 Nov. 1905), the daughter of the Reverend John Barton, Presbyterian minister of Clinton, N.Y. She was active in civic and cultural affairs at New Bern, serving for a time as president of the Silver Cross chapter of the International Order of King's Daughters and Sons and then as chairman of its local circulating library. On 15 Feb. 1902 a meeting to consider the purchase of more books for the library was held at her fine frame home, which her husband had built on East Front and Short streets (now moved back to the south side of Change Street). This library, the first permanent one in New Bern, was the forerunner of the current New Bern–Craven County public library, one of the oldest in the state.

Both Judge and Mrs. Seymour were buried in Cedar Grove cemetery, New Bern. Surviving them were a daughter, Mrs. Cornelia Walsh, and a son, John Barton.

Thank you so much for this.

Thank you so much for this. This is my grandfather’s grandfather, so it was very exciting to learn more about him. (A minor point is that now I understand why Sherrill is a family Christian name).