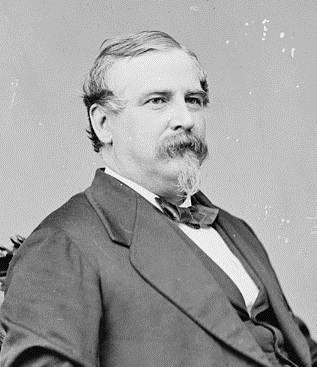 Francis Edwin Shober, lawyer and congressman, was born in Salem, the son of Emanuel and Anna Hanes Schober and the grandson of Gottlieb Schober. After attending the Moravian schools in Salem and in Bethlehem, Pa., he was graduated from The University of North Carolina in 1851. He then studied law and was admitted to the bar in 1853. Moving to Salisbury in 1854, he began practicing law.

Although a Democrat before the Civil War, he opposed secession. In 1862 he won a seat in the House of Commons as a Conservative, his first political office. He was reelected in 1864. Shober was a trustee of The University of North Carolina from 1862 until the Republicans took over the state in 1868.

In 1865, after the war, Rowan County sent him to the state senate. Also in 1865 provisional governor William W. Holden appointed him to the Salisbury Board of Commissioners as well as a justice of the Rowan County Court. But Shober soon broke with Holden, aligning himself with the Democrats and Governor Jonathan Worth. In 1868 Worth named Shober a director of the Western North Carolina Railroad. In the same year Shober was elected as a Democrat to the Forty-first Congress from North Carolina's Sixth Congressional District. However, the election was contested by his Republican opponent, Nathaniel Boyden. Boyden accused the Democrats of having ballot boxes at the polls that were not clearly marked, of intimidating and threatening Republican voters, and circulating a forged document—purporting to come from the chairman of the National Republican Executive Committee—that was antiblack in tone so that the freedmen would not vote for Boyden. In April 1870 the House of Representatives reported that although there was probably some minor intimidation and fraud, there was not enough to change the election results. In addition, it found no evidence that Shober had anything to do with these activities. Over a year after his election, Shober was finally seated in the House. He was reelected to the same seat in 1870.

In Congress Shober supported the concept of states' rights and southern autonomy from federal control. For example, in 1871 he spoke against a bill on the enforcement of the Fourteenth Amendment as one that would increase the power of the central government and completely annihilate the sovereignty of the states. He maintained that the Democratic party in the South recognized and protected the rights of blacks as citizens, including their right to vote and that, therefore, such a bill was unnecessary.

In 1872 Shober did not seek reelection to Congress but instead returned to his law practice in Salisbury. Still active in Democratic state and national politics, however, he served as a delegate to the North Carolina Constitutional Convention of 1875, a county judge from 1877 to 1878, chief clerk of the U.S. Senate during the Forty-fifth Congress, acting secretary of the Senate during the Forty-seventh Congress, delegate to the National Democratic conventions of 1880 and 1884, and a member of the North Carolina Senate in 1887.

Besides his law practice and political activities, Shober engaged in manufacturing after the Civil War. Along with G. A. Bingham, he established one of the largest mercantile firms in Rowan County—Bingham and Company—which made boots, shoes, caps, and wood and willow ware.

Shober married Josephine Wheat, the daughter of the Reverend Dr. John Thomas Wheat, a North Carolina religious and literary leader. They had two sons, Francis Emanuel and Charles E., and three daughters, Anna May, Selina R., and Frances W. Shober died at his home in Salisbury and was buried in the old English cemetery; later his remains were moved to Chestnut Hill Cemetery.

For documents on the contested congressional election of 1868, see the North Carolina Collection, University of North Carolina, Chapel Hill.