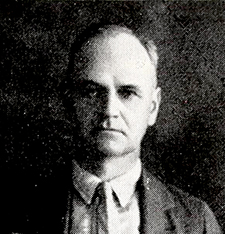 Clarence Albert Shore, physician and public health official, was born in Salem, the son of Henry Washington and Lavinia Ellen Boyer Shore. Widely known in medical circles throughout the United States, he was a recognized authority on the treatment of hydrophobia. Shore earned B.S. (1901) and M.S. (1902) degrees from The University of North Carolina, where he subsequently established a reputation as an outstanding instructor in biology.

In 1907 he received the M.D. degree from Johns Hopkins University. Several months later he became director of the North Carolina State Laboratory of Hygiene, in Raleigh, a post that he held for twenty-five years. Through his work, the laboratory established a national reputation; he was especially interested in the control of waterborne fever diseases.

In 1927 Shore was one of two delegates selected by the U.S. Public Health Service to represent the United States at an international conference on rabies at the Pasteur Institute in Paris. Two years later he was awarded an honorary doctor of laws degree by The University of North Carolina. Shore was a member of the American Medical Association, American Public Health Association, Society of American Bacteriologists, North Carolina Academy of Science, Phi Beta Kappa, Sigma Xi, Sigma Alpha Epsilon, and Nu Sigma Nu. At the time of his death he was president of the Tri-State Medical Association, an organization of physicians from North Carolina, South Carolina, and Virginia. He was a member of the Moravian church.

A tribute to his work, published in the Bulletin of the State Board of Health, reads as follows: "His continuous official service has already been longer than that of any other staff official ever connected with the North Carolina State Board of Health. His work in production and distribution of biologicals has saved many lives. In establishing competent diagnostic facilities through the laboratory, he has not only saved many lives but has prevented much human suffering. Twenty-five years is a long time to stick to a public job through all the vicissitudes of conflicting political, professional, and commercial interests. But Dr. Shore has never been too weary to patiently assist any physician, health officer or individual citizen who has appealed to him in any problem affecting the public health."

On 27 May 1914 Shore married Ellen Dortch of Goldsboro and Raleigh. He died in Raleigh and was buried in Oakwood Cemetery.

Honorary Degrees Awarded by the University of North Carolina at Chapel Hill, 1799-2009: http://www.lib.unc.edu/ncc/ref/unc/honorarydegrees.html