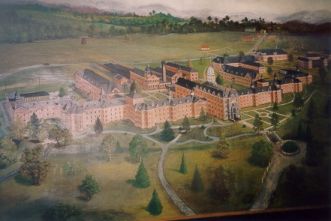 Samuel Sloan, architect and publisher, was born in Honeybrook Township, Chester County, Pa., the son of William and Mary Kirkwood Sloan. After completing apprenticeship as a carpenter in nearby Lancaster County in 1833, he worked as a builder in Philadelphia until 1849. By 1850 he was listing himself as architect, and within a decade he achieved a national reputation as a designer of both public and private institutional buildings. These included a variety of schools, churches, halls for fraternal orders, and courthouses, mainly in the Philadelphia area but frequently in the South.

His wider fame came as a collaborator of Dr. Thomas S. Kirkbride, an expert in the treatment of the mentally ill. Together they pioneered the Kirkbride System, which became the American standard for design and organization of hospitals for the insane. These buildings embodied innovative features such as fire-resistant construction, hardware and plumbing arrangements taking into account the condition of the inmates, and floor plans expressing Kirkbride's belief that the hospital staff should be dispersed among the patients.

Also in the 1850s Sloan designed at least twenty commercial structures, all in Philadelphia, and dozens of residences—many of them terrace houses and villas in the newly developed suburbs in the city's western and northern reaches. In North Carolina in 1859, he designed Baptist and Presbyterian churches built in Wilmington; the former was still standing in 1993. More important for the development of American domestic architecture was Sloan's promotion of himself and his ideas in pattern books aimed at the general public: The Model Architect (1851), The Carpenter's New Guide (16th ed., 1854), City and Suburban Architecture (1859), Sloan's Constructive Architecture (1859), Sloan's Homestead Architecture (1861), and American Houses: A Variety of Designs for Rural Buildings (1861). Also, from 1852 to about 1859 Sloan supplied many house plans in Godey's Lady's Book. 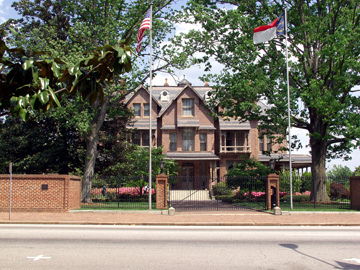 Although it is impossible to estimate the number and geographic location of houses inspired by these books, their impact was considerable. In them the architect discussed site selection, architectural styles, the "embellishment of grounds," furniture, and costs. The types ranged from "workingmen's model cottages" (at $300) to an "Oriental Villa" ($40,000)—the latter the famed uncompleted house for North Carolinian Haller Nutt in Natchez, Miss. (1855–62). If the ornament and styles—Gothic, Italianate, "Mansardic"—were much like those of his mid-Victorian contemporaries, Sloan's plans were often pragmatic and highly functional. But his Architectural Review and American Builders' Journal (1868–70), the first American periodical of its kind, was for professionals, who gave it little financial support.

During his final years Sloan spent much time in North Carolina, where he had a number of important commissions: in Wilmington, the Bank of New Hanover (1873); in Morganton, the Western State Asylum for the Insane (1875–84); and in Raleigh, the State Exposition Building (1883), the Governor's Mansion (1883–84), and additions to the State Hospital for the Insane. He designed a new jail (1882) and courthouse (1883) for Craven County. In 1883 he apparently was busy in Raleigh with additions to St. Mary's College and Peace Institute and with some rebuilding at St. Augustine's College. In the same year he also designed the second New Bern Academy. In Chapel Hill for The University of North Carolina he designed an auditorium that came to be called Memorial Hall, and with the support of alumni a commons hall and ballroom just off the campus (where dances could be held without offending certain segments of society).

Sloan's wife was Mary Pennell, of Philadelphia. They had one son, Ellwood Pennell, and perhaps a daughter who was with Sloan when he died in Raleigh from heat prostration following excessive exposure to the summer sun. After his temporary interment in Raleigh, it is believed that he was buried in Philadelphia.

The Building of West Philadelphia, Who's Who, UPenn Archives: http://www.archives.upenn.edu/histy/features/wphila/exhbts/grubel/whom.html

The Building of West Philadelphia, Development of a Suburb, UPenn Archives: http://www.archives.upenn.edu/histy/features/wphila/exhbts/grubel/23develop1.html

Broughton Hospital (formerly the Western State Asylum for the Insane) was designed by Sloan. This painting of the campus, composed in 1914 by Harper Bond. Image courtesy of the North Carolina Division of State Operated Healthcare Facilities. Available from http://www.ncdhhs.gov/dsohf/broughton/ (accessed March 21, 2013).