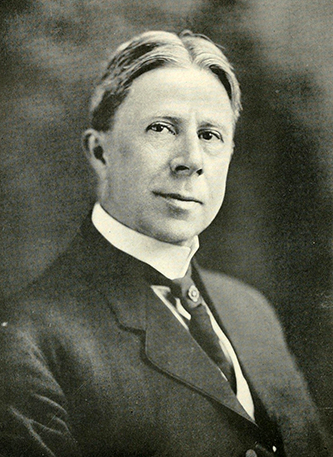 John Humphrey Small, congressman and father of the Atlantic Intracoastal Waterway, was born in Washington, Beaufort County, the son of John H. and Sally A. Sanderson Small. Small's parents, who had migrated from Pasquotank County in 1835, were prominent planters in Beaufort. Small attended the Washington schools and Trinity College (now Duke University). At the end of his junior year at Trinity, he studied law in the offices of Charles F. Warren and Judge William B. Rodman; he was admitted to the bar in 1881.

Small began his political career early, having been appointed reading clerk of the state senate only days after his admission to the bar. Between 1881 and 1885 he served as county superintendent of public instruction in Beaufort and as solicitor of the inferior court. In 1883 he became proprietor and editor of the North Carolina State Press, which he renamed the Washington Gazette. Under Small, the Gazette became the leading organ of the state Democratic party. In addition, he was a member of the Washington City Council (1887–90), attorney of the Beaufort County Board of Commissioners (1888–96), mayor of Washington (1889–90), a delegate to the Democratic state conventions (1889–1920), and presidential elector on the Democratic ticket of William Jennings Bryan and Arthur Sewall (1896). Small was elected as a Democrat to the Fifty-sixth Congress; reelected to the House of Representatives ten times, he served from 4 Mar. 1899 to 3 Mar. 1921.

In Congress Small was an outspoken party leader on issues such as Prohibition, woman suffrage, education, and agricultural problems. But his major interest involved increasing waterborne transportation along the Atlantic coast. Small felt that such a waterway not only would serve the transportation needs of the general public but also would provide added commerce and trade routes for the coastal regions of the eastern seaboard. He envisioned a series of interconnecting canals extending from Boston to Key West, Fla., a distance of three thousand miles.

His early attempts to obtain funding for his project ended in failure, for the Republican opposition continually defeated his proposals. Yet with the outbreak of World War I both parties began to reconsider the idea. However, the waterway was now seen as a possible defense measure and not as a new mode of commerce and transportation. In 1917, when he was named head of the House Committee on Rivers and Harbors, Small publicly stressed the defense issue but privately pushed the economic advantages. That year he proposed many new bills for the waterway, all of which passed.

With the the Atlantic Intracoastal Waterway thus assured, Small declined to be a candidate for renomination in 1920 and joined the legal staff of the Securities and Exchange Commission in Washington, D.C., where he remained until 1931. During this period he witnessed the completion of many sections of the waterway, including the Norfolk-Beaufort segment, which was finished in 1921.

On 11 June 1890 Small married Isabella C. Wharton, the daughter of Colonel R. W. Wharton. John and Isabella had one daughter, May Belle. Small was a member of the National Rivers and Harbors Congress and of the Atlantic Deeper Waterway Association. Affiliated with the Methodist Episcopal Church, South, he was buried in the Oakdale Cemetery, Washington, N.C.

Samuel A. Ashe, Cyclopedia of Eminent and Representative Men of the Carolinas, vol. 2 (1892).