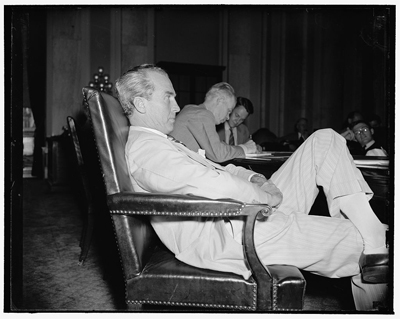 William Howell Smathers, attorney, jurist, and U.S. senator, was born in Waynesville, the youngest son of Benjamin Franklin and Laura Howell Smathers. He attended local schools, Washington and Lee University, and The University of North Carolina, from which he was graduated in 1910. He was admitted to the bar in the latter year. In 1911 he "went north" to join his brother, Frank, in Atlantic City, N.J., in the practice of law with the firm of Endicott and Endicott. In spite of his many years in New Jersey, Smathers never lost his southern accent and always said he had a "hankerin" to return to North Carolina, which he finally did when he retired in 1951.

Although a Democrat in heavily Republican territory, he filled a succession of political posts in New Jersey, earning a reputation as an upsetter. In 1913 he became a supreme court commissioner, and in 1922, at age thirty-one, he was named a common pleas judge, the youngest man up to that time named to the bench. Smathers, who had a reputation as a severe judge, started a road gang system in Atlantic County to make prisoners earn money to be forwarded to their dependents. Tough on racketeers, he received many death threats and habitually carried a pistol. In 1930 the Kiwanis Club of Atlantic City, recognizing him as the city's "Most Useful Citizen," presented him with its Good Deeds Award for his outstanding services on the bench.

In August 1934 Smathers was appointed first assistant attorney general of New Jersey. While in that post he assisted in the Dorrance tax appeal case, various railroad tax appeals, and other tax cases that meant millions of dollars to the citizens of the state. The following autumn he was elected to the New Jersey Senate, the first Democrat to hold that office for Atlantic County in more than sixty years. He was then selected by Jersey City's former mayor, Frank Hague, to run for the U.S. Senate. Smathers was elected in the Roosevelt landslide of 1936. While in the Senate he was mentioned either as a possible vice-presidential candidate in 1942 or as a New Jersey gubernatorial candidate. Neither option materialized.

In 1939 Smathers introduced a bill to ease immigration restrictions for elderly political and religious refugees. He endorsed the Zionist cause in Palestine. In 1941 his resolution to admit Cuba as a state was repudiated by the Cuban government. He served on the Senate Banking and Currency Committee and was instrumental in establishing a fifth judgeship for the New Jersey Federal District Court. Smathers was defeated for reelection in 1942 by Republican Albert W. Hawkes. He practiced law in Atlantic City until his retirement and return to North Carolina. An ardent sportsman, he was particularly fond of hunting and fishing, and he raised champion English setters.

In 1916 Smathers married Syd Brady of Atlantic City. They had five children: Jane, Barbara, Polly, Joseph, and Benjamin Franklin. They were divorced in 1934. In 1938 he married Mary J. Folley of Winter Haven, Fla., and they had three children: James Folley, Fairfax Virginia, and William Howell, Jr. Smathers died in Asheville and was buried in Green Hill Cemetery, Waynesville.