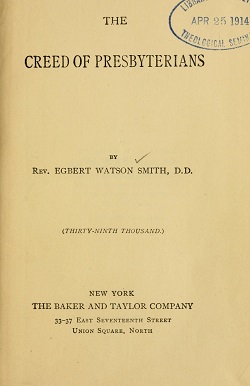 Egbert Watson Smith, minister, author, and head of Foreign Missions for the Presbyterian Church of the United States, was born in Greensboro, the son of Dr. Jacob Henry, minister of the First Presbyterian Church, by his second wife, Mary Kelly Watson Smith, the daughter of Judge Egbert Reid Watson of Charlottesville, Va., for whom he was named. After attending school in Greensboro, Egbert Smith entered Davidson College in 1878 and was graduated in 1882 as valedictorian of his class. He taught school for a year in York, S.C., then entered Union Theological Seminary in Virginia to prepare for the ministry. Upon completion of his three-year course in 1886, he was called to be associate pastor at the First Presbyterian Church in Greensboro, serving as superintendent of Sunday school and responsible for mission work. The Westminister Presbyterian Church was organized as a consequence of his efforts, and in October 1887 Smith was called to be its minister.

In 1891 he was placed in charge of all evangelical work for the Synod of North Carolina, and during 1892–93 he served as superintendent of Home Missions for the Synod of Mississippi. In both these posts he demonstrated his organizational ability and skill in presenting a cause. On 15 Apr. 1894 he married Mary Black Wallace, the daughter of Judge Jesse George Wallace of Franklin, Tenn. They had two sons and two daughters: Margaret Heiskell, Egbert Watson, Jessie Wallace, and Marion Wallace. Also in 1894 Davidson College awarded Smith the doctor of divinity degree.

He returned to Greensboro's First Presbyterian Church in December 1893 to assist his aging father as copastor and remained as minister after his father death's in November 1897. The aristocratic appearance of Egbert Smith, with mustache, goatee, and pince-nez, was not indicative of the warm and sparkling personality within. His congregation spoke of his eloquent preaching and loving ministry. "From teaching a blind member to use a typewriter in order to earn a living to ministering to . . . souls in distress, he was indeed the 'Father of his people,'" said Elder John W. Simpson. The local newspaper described him "astride his bike calling on communicants, the tails of his frock coat flying in the wind." During the twelve years of his pastorate, the church's membership increased to over nine hundred, and a new Sunday school building was erected with a skating rink in the basement. Under his leadership the church involved itself in home mission work, helping to establish three churches in the city and giving financial support to three others in the state. In January 1906 Smith became minister of the Second Presbyterian Church of Louisville, Ky., which under him became one of the strongest in the assembly.

In 1911 Smith left the pastorate to become executive secretary of Foreign Missions for the Presbyterian Church of the United States, headquartered in Nashville, Tenn. Seeking to place its operations on a more systematic basis, he wrote manuals for the guidance of missionaries and devised means of achieving a more dependable annual income for their work. He believed in the ordination of native people as ministers so that missionaries could move on to new fields. In 1927 the Presbyterian Church of the United States joined with fifteen other denominations to establish the United Church in China—an attempt to place Christianity above denominational barriers. By that date the Southern Presbyterian church was supporting 338 ministers, doctors, nurses, teachers, and others in the mission field.

During those years Smith wrote numerous books, most of which, like The Desire of All Nations (1928), were designed to stimulate interest in and support for mission activities. His first book, The Creed of Presbyterians (1901, rev. ed. 1941), written for lay people, went through numerous printings and had the largest circulation of any book on that subject. Significantly, it minimized those aspects that set Presbyterianism apart, stressing, rather, that the creed, in its essentials, was one upon which most Protestants could agree. And Smith urged his readers to do their "best to further that growing sense of the unity of all believers in Christ." In Paul's Way in Christ (1942), he described the techniques that made Paul an effective preacher. Many of those traits applied to Smith's own preaching and writing: his prose was clear and easily understood, he illustrated his points with interesting stories, he set a target or goal, he was earnest, and he stressed now as the time to act.

In 1932, at age seventy, Smith retired as executive secretary of Foreign Missions, but the church, unwilling to dispense with his services, appointed him to the newly created post of field secretary. Until his death from a heart attack twelve years later, he continued to travel, write, and speak in support of foreign missions. He was buried in Greensboro's Green Hill Cemetery. For thirty-three years he had been the strongest advocate of foreign missions in the Presbyterian Church of the United States and perhaps in America.