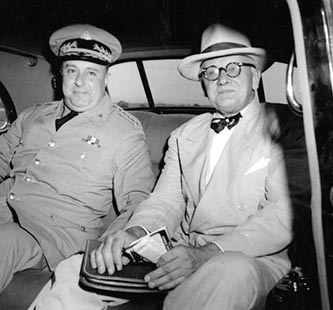 Capus Miller Waynick, newspaper editor, public official, and ambassador, was born in Rockingham County, the son of Joshua James and Anna Moore Waynick. A son and grandson of blacksmiths and farmers, he was a student at The University of North Carolina (1907–9) but withdrew. From 1911 to 1913 he was a reporter for the Greensboro Record. After a brief stint as a salesman of novelties, he returned to journalism as a reporter with the Charlotte Observer (1913–14) and as editor (1915–17). During World War I he served as an infantry private. Afterwards he became publisher of the Greensboro Daily Record (1920–22) and also for many years was editor of the High Point Enterprise.

Waynick represented Guilford County in the General Assembly in 1931 and served in the state senate in 1933. For the period 1933–34 he was state director of the National Reemployment Service, one of the federal agencies designed to counteract unemployment, and in 1933–37, during the administration of Governor J. C. B. Ehringhaus, he was chairman of the State Highway and Public Works Commission. In this position he directed the repair of unsafe bridges and road maintenance, both of which had been unavoidably neglected during the depression. Waynick was commended by the press for his fairness in allocating highway funds. It was perhaps because of his personal knowledge of the subject that he was the author of volume one of North Carolina Roads and Their Builders, published in 1952.

In 1937 Governor Clyde R. Hoey named him chairman of the State Planning Board, and in 1942 during the administration of Governor J. Melville Broughton he founded and was the first director of the state's Health Education Institute. As chairman of the state Democratic party, he was campaign manager for gubernatorial candidate W. Kerr Scott in 1948 but declined to accept the traditional political preferment usually given to those who performed that service for a successful candidate.

President Harry S Truman named Waynick ambassador extraordinary and plenipotentiary to Nicaragua, where he served from 21 May 1949 to 18 July 1951. Waynick was fluent in Spanish (as well as proficient in French) and had served as unofficial translator for recent governors J. Melville Broughton and R. Gregg Cherry. In the summer of 1951 President Truman named Waynick to be ambassador to Colombia, where he served from 28 July 1951 to 24 Oct. 1953. Because of his friendly nature, his inquisitiveness as an experienced journalist, and his language skills, he endeared himself to people in many walks of life and proved to be an effective diplomat. The president called Waynick home briefly on temporary leave in 1950 to organize the Point-Four Program to aid backward countries. In 1955 he headed Governor Luther Hodges's Small Industries Program, which resulted in the establishment of the North Carolina Business Corporation.

When the adjutant general of North Carolina resigned on 18 Aug. 1957 following discovery that three National Guard colonels had agreed to a pact to rotate the brigadier generalship in turn, Governor Hodges appointed Waynick to become adjutant general with the rank of major general. Though regarded as a civilian, Waynick had maintained his rank in the National Guard and in the U.S. Army Reserve. He served as adjutant general from 12 July 1957 to 30 Dec. 1960. Between 1961 and 1963 he worked in New York City, where he was executive vice-president of the Richardson Foundation, a private North Carolina endowment that supported public causes. It was also in the decade of the 1960s that President Lyndon B. Johnson named Waynick to the national Human Relations Commission. For the remainder of his life Capus Waynick answered the calls of the governors of the state as well as others for consultation on various subjects but especially on race relations. He was coauthor of the book, North Carolina and the Negro, published in 1964.

In 1915 Waynick married Elizabeth Hunt McBee, of Lincoln County, the great-niece of Mrs. Thomas "Stonewall" Jackson. They had no children. Their home was a restored antebellum house on a 24-acre farm near High Point where Waynick had his own small golf course. He was an avid sportsman and for many years regularly played tennis, golf, handball, and other games. He and his wife were excellent bridge players, and he once wrote a bridge column for a local paper. In 1971 he was the recipient of the North Carolina Award for public service. A Presbyterian, a Democrat, and a Freemason, he died in High Point at age ninety-seven after a long illness.