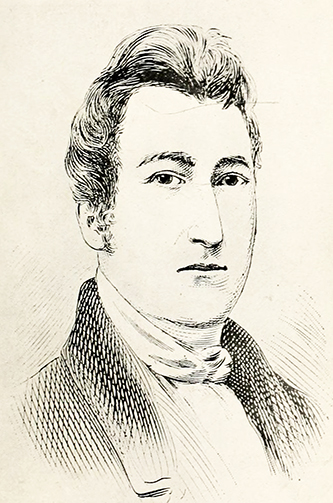 James Webb, pioneer physician of Hillsborough and Orange County, Presbyterian educational leader and philanthropist, merchant, and banker, was born at Tally Ho, Granville County, the second child and eldest son of ten children of William (1745–1809) and Frances (Fannie) Young Webb (d. 1810), and the grandson of gentleman planter James (1705–71) and Mary Edmondson Webb (1712–95) of South Farnham Parish, Essex County, Va. During 1795–96 he attended The University of North Carolina, where, on or about 18 Aug. 1796, he made the significant motion to change the English name of the Debating Society to its Greek equivalent, Dialectic Society. This was done officially a week later, on 25 August, and four days after that the companion Concord Society followed suit and changed its name to Philanthropic Society. Thus, the time-honored names of the university's Di and Phi Societies are the result of James Webb's 1796 motion. He enrolled in 1798 for a medical course at the University of Pennsylvania under Benjamin Rush and established himself as a physician and merchant in the town of Hillsborough in the closing years of the eighteenth century. Like most early doctors, Webb necessarily supplemented his uncertain income from the medical profession in other ways, and his busy mercantile and medical careers ran concurrently until the end of his life. From 1799 to 1801 or a little later, he appears to have been a silent partner in the Hillsborough store of the successful Raleigh mercantile firm of Messrs. Southey and William Bond. He was also the major partner for several years with his brother Thomas in a mercantile establishment, James Webb & Co., near their father's home in Granville County.

In the late autumn of 1799 Dr. Webb was a principal figure in the establishment of the North Carolina State Medical Society, which met in Raleigh on 17 December for its historic organizational meeting. Webb was elected vice-president and appointed a member of the Board of Censors created by this early society (the eighth in the nation) to examine and accredit would-be doctors. This important forerunner of the modern system of medical examiners was the pioneer regulation of its kind. At the society's second meeting on 1 Dec. 1800, Webb read a paper on the causes and prevention of gout and rheumatism. Although the new State Medical Society ceased to exist after only five years, probably because of bad roads and the difficulties of transportation, it was Webb's ward and best-known medical student, Dr. Edmund Charles Fox Strudwick, who, forty-five years later in 1849, revived it from its dormant state and served as president. The seventy-five-year-old Webb was then made an honorary charter member and signally honored by the society.

Numbers of Webb's lengthy orders for medicines, small equipment, and so forth, sent to New York suppliers in the 1840s, have been preserved in the James Webb Papers in the Southern Historical Collection at The University of North Carolina, an immensely valuable compilation of records detailing many essential aspects of the growth of Hillsborough and Orange County. Webb kept no case histories or formal medical records as such. But fascinating notations concerning specific cases are to be found hurriedly jotted down in dim pencil on the backboards of his own mercantile ledgers, and a few accounts of special cases are recorded in the Cameron Papers in the Southern Historical Collection. Webb's ledgers sometimes note prices charged—"$30 for leg amputation," "Death and Burial, $1," "For cuting his eye—$2," "By Death—$12," "Ex Dent Julia [charged]"—and often record that he was never paid at all, or perhaps in cider, oats, eggs, chickens, and watermelons.

For many years he published an annual Bill of Mortality (vital statistics) in the Hillsborough Recorder that frequently included other useful data—the Bill of Mortality for 6 Jan. 1842 noted that there were then 150 students in the Hillsborough area alone. In 1822 Webb gave free smallpoxvaccinations every Wednesday for two hours—a landmark clinic effort in Orange County medical history. Like many early doctors, he provided a vast amount of charity work to both blacks and whites and to area students that was ultimately paid for by mercantile undertakings of one kind or another.

Webb's first recorded real estate transaction in Hillsborough was the notable purchase for £300 on 17 Oct. 1800 of two properties on Margaret Lane, Lots 10 and 13, later sold to his friend Duncan Cameron, for whom he served as second in a famous duel fought between Cameron and the lawyer William Duffy on Sunday, 17 Apr. 1803, just over the Virginia line. The lots were the site of Cameron's law office (later Chief Justice Frederick Nash's) and his home (later Frederick Nash's and the Nash and Kollock School). For two and a half years (1 Jan. 1805–1 July 1807) Webb served as postmaster of Hillsborough.

On 26 Jan. 1807, in preparation for his coming marriage, Webb bought from James Phillips the five lots on the northern side of East Queen Street where he lived for the rest of his life—Lots 63, 64, and 65 where there stood an old inn that he evidently gradually converted into a rambling L-shaped yellow frame house, Lot 83 on the southern side of East Queen Street where he built his office and dispensary (with a saddler's shop just above it), and Lot 102, "the barn lot" adjoining Lot 83 on the south. (None of these structures now survives.) This five-acre estate, once a landmark in Hillsborough, was kept intact for decades.

In 1810 Webb was appointed Hillsborough agent (cashier) of the Branch Bank of the Cape Fear, a post that he held until 1846. The bank, staffed by five directors, in addition to the agent, rented a small structure belonging to the William Whitted estate on West King Street. Scores of stockholders' lists, records of quarterly dividends paid, loans and debts outstanding, and so forth still exist, as does at least one of the massive ledgers of the bank.

As early as 1804 Webb had begun his long, varied, and devoted service to the cause of education for both males and females at every level in Hillsborough. On 13 Dec. 1804, as "Trustee," he signed advertisements in the Raleigh Register for the Hillsborough Academy under Richard Henderson. He was clerk of the academy's board in 1815 and still a member of its nine-man board of trustees in 1839, when William James Bingham was principal. In addition, Webb served as guardian for countless boys attending the Hillsborough Academy, many of whom boarded in his home and for whom he sometimes became financially responsible.

Webb also single-handedly initiated and underwrote two famed Presbyterian schools in Hillsborough—Miss Mary W. (Polly) Burke's School and the Burwell Female School. In 1817 he erected a log schoolhouse (still standing as part of the Thomas Webb House) on his own Lot 63 in which his friend and neighbor, Mary Burke, should conduct a day school for the Webb children and those of his neighbors. This small, very modest elementary school continued with high success until 1834 and is usually cited as the forerunner of Hillsborough's excellent Presbyterian female schools. After the death of James Hogg, Webb had become Miss Burke's staunch supporter and closest adviser and remained so—even after she moved to Alabama in 1834—until his death.

In 1837 Webb suggested to Mrs. M. A. Burwell that she should teach his daughter Mary and two other Presbyterian girls, and the idea of the Burwell Female School took root. The new school, which not only replaced Miss Burke's school but also provided an extra four-year curriculum for older girls, operated successfully for twenty years (1837–57), with Webb always listed as its "Patron" (trustee). Burwell School records preserved in the James Webb Papers show that Webb financially underwrote the first renovation of the Burwell house (then the Presbyterian Manse) and steadily supported the undertaking without stint. Both Miss Mary W. Burke's School and the Burwell Female School were unquestionably Webb's personal creations. In 1825 he was also the president of the Orange County Sunday School Union, which petitioned unsuccessfully to gain state support for twenty-two Sunday schools to teach poor and indigent children to read and write.

At the opposite end of the scale, Webb was a "faithful, strong, and wise" trustee of The University of North Carolina for thirty-eight years (1812–50). In 1827 he served on the board of visitors and in 1830 on an emergency committee to help restore the university to a sound financial basis after the panic of 1825. For nearly half a century his involvements with education were continuous, widely varied, and extremely demanding, ranging from his own "Medical School" to the state university.

Webb's philanthropic support to local churches was no less than his aid to local schools. Although only his wife was formally listed in 1816 as one of the nine organizers of the new Hillsborough Presbyterian Church, Webb signed the first "true copy" of pew rental lists on 20 Sept. 1816 and consistently made large contributions to the Reverend John Knox Witherspoon's salary and to other church expenses over a period of years. In 1835 he took in his own name a ninety-nine-year lease on the extreme southeastern corner (30' × 40') of the Old Town Cemetery lot (98) and there erected a frame Sessions House with bell tower, used as a Presbyterian Sunday School room and eventually as a public library until 1934. He also served as a Presbyterian elder from 1835 until his death.

In 1822 Webb had provided the trustees of the Methodist congregation with both money and lumber to erect the first Methodist church in Hillsborough on the southwestern corner (44' × 44') of his own Lot 102, and on 1 Feb. 1823 he leased to them for ten shillings the plot "on which part the house now stands." An interesting paper, written in 1832 by Joseph B. Bacon, a leading Methodist trustee, mentions in considerable detail the indebtedness of the church to Webb, noting his many voluntary gifts and loans "and that he has waited patiently Ten years for the money that we still owe him." Bacon noted that Webb and his wife had frequently entertained the minister "comfortably" on Sundays and had "looked after" his horses.

Webb's extensive mercantile undertakings included a general store and lumberyard, later known as Webb, Long & Co., in which his son-in-law Dr. Osmond F. Long was a partner, and a sizable brickyard (Webb & Hancock) operating near the Eno River. He also entered into brief partnerships with various townsmen on occasion, such as with J. J. Freeland under the title Webb & Freeland. A sideline that almost amounted to a business with both Webb and Justice Thomas Ruffin was the hiring out on an annual basis of the slaves of widows and of ailing or absent owners. Webb also served as clerk and master in equity in scores of estate settlements and as the executor of innumerable Hillsborough and Orange County wills. The paperwork involved in his undertakings was enormous, and his swift, sloping handwriting appears on innumerable preserved lists, bills, receipts, inventories, and the like.

On 1 Nov. 1842 Dr. James Webb was declared bankrupt, and on 11 December his possessions were sold at public auction—the inevitable result of four decades of openhanded generosity to Hillsborough schools and churches, to academy students and medical students, to the sick and poor, and to his friends and relatives, and of a huge backlog of unpaid debts. His friends and neighbors repurchased for Webb and his family almost every item offered at the sale except "an old copper kettle & an old pair of steelyards"—a tribute to his half century of undeviating honesty and service to the town.

Mrs. Webb, long ailing, died in 1852, and Webb died three years later at age eighty-one. Both were buried in the Webb-Long plot in Hillsborough's Old Town Cemetery. No likeness or portrait of Webb in his later years is known to exist; a portrait of him as a young man, the provenance of which seems not to be certainly known, is reproduced in various publications. There also is said to exist a "composite" portrait of "James Webb" in which leading characteristics of the successive James Webbs have all been blended together in a single portrait.