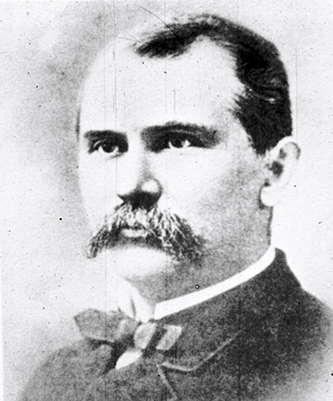 After completing his secondary education in the Wilmington public schools Wood worked in a local drugstore and studied medicine under several physicians. With the outbreak of the Civil War, he volunteered for military duty. In 1862 Wood was assigned to Richmond, Va., where he served as a hospital steward and, at the direction of the Confederate secretary of war, attended lectures at the Medical College of Virginia. After he passed a medical examination, the Army Medical Board appointed him an assistant surgeon with the rank of captain.

From February 1863 until the end of the conflict, Dr. Wood served with the Third North Carolina Regiment, Jackson's Corps, participating in several important battles, including Chancellorsville and Gettysburg. When the war ended he returned to Wilmington and soon established a successful medical practice. For at least a year he was in charge of Mount Tirzah Hospital, a facility just outside the city that was used during the 1865–66 smallpox epidemic to care for indigent black victims of the disease. As a result of his experiences during the smallpox epidemic, Wood developed a scholarly interest in the work of Dr. Edward Jenner, the English physician who introduced vaccination. Wood himself subsequently became a leading advocate in North Carolina of inoculation.

In the opinion of one medical historian, Wood was "probably the greatest contributor to the development of North Carolina medicine in the last half of the nineteenth century." This assessment is based largely on his activities in behalf of the North Carolina Board of Health. Established in 1877 by act of the General Assembly, the original board enjoyed only limited powers and was allocated a mere $100 in state funds. By acts of 1879 and 1885 the board's duties and powers were enlarged and its annual appropriations increased to $2,000. In 1877 the state medical society elected Wood secretary-treasurer of the Board of Health, a position he retained until his death fifteen years later. During these formative years of a state-sponsored public health program in North Carolina, he supervised virtually single-handedly the activities of the Board of Health. Although often discouraged and frustrated by the lack of adequate state support for public health services, Wood, operating out of his Wilmington office and on at least one occasion using personal funds to meet board expenses, worked diligently to fulfill the duties of secretary-treasurer.

Much of the early work of the North Carolina Board of Health was educational. During its first year of operation, the board began to issue pamphlets on good health and sanitation practices for public distribution. In 1886 Wood started to compile and edit the Board of Health's Bulletin, a monthly newsletter containing reports on health conditions in the state and articles on preventive medicine. Because his contributions in the early development of the board were so significant, he is often regarded as the "father of the North Carolina Board of Health."

In 1878 Wood and Dr. Moses John De Rosset III, also a prominent Wilmington physician, founded the North Carolina Medical Journal, of which Wood was the principal editor until his death. In his editorials he advocated increased state funding of public health work, the adoption of uniform procedures for performing autopsies, and the systematic recording of vital statistics by local authorities. Although skeptical in 1882 of "would-be sanitarians" who "greatly exaggerate the dangers of adulteration," he later endorsed the publication by state agencies of chemical analyses of adulterated foods and drugs.

Active in state and national professional organizations, Wood served as secretary (1867–71) and president (1881–82) of the North Carolina Medical Society. From 1867 to 1872 he was secretary of the State Board of Medical examiners and in 1878 was elected a member of the board as examiner in chemistry. In 1880 and again in 1890 he was elected to the committee to revise the United States Pharmacopeia. At the time of his death he was first vice-president of the American Public Health Association.

Though extraordinarily active in his professional life, Wood found time to study botany and, indeed, came to be recognized as one of the state's leading botanists. He presented several papers on botanical topics before the Wilmington Historical and Scientific Society and with Gerald McCarthy collaborated on "Wilmington Flora," published in 1887 in the Transactions of the Elisha Mitchell Scientific Society.

Wood was awarded an honorary M.D. degree by the University of Maryland (1868) and an honorary LL.D. degree by The University of North Carolina (1890). He married Mary Kennedy Sprunt of Wilmington and had five children: Edward Jenner, Thomas Fanning, J. Hunter, Jane, and Margaret. A member of the Episcopal church, Wood died in Wilmington and was buried in Oakdale Cemetery.

The North Carolina Museum of History has an oil portrait of Dr. Wood commissioned by the state medical society and presented to the state library in 1894.