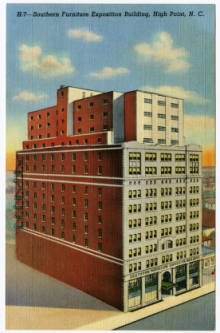 Manleff Jarrell Wrenn, pioneer furniture manufacturer in High Point, was born near Liberty in Randolph County, the son of Merritt C. and Nancy Elizabeth Jarrell Wrenn. His father, a farmer, was a Confederate soldier in the medical department who died in Raleigh near the end of the war. His mother, who was educated in the New Garden Boarding School, suffered many hardships rearing her two sons; her daughter died in childhood. When her sons were still young, she sold the farm and moved to the small town of High Point, where they attended school and Manleff worked in his uncle's hotel and clerked in a grocery store.

At age twenty-two Wrenn invested his meager savings in the grocery business that he continued to operate until 1888. His brother, Thomas F., joined J. H. Tate and E. A. Snow in organizing the High Point Furniture Company. Soon Manleff acquired Snow's interest, and by 1898 he had obtained the shares of the other partners as well. This was the first furniture factory in the town, and as the sole owner of a flourishing enterprise, Wrenn began to expand his business interests. He became a director of the Atlantic Bank and Trust Company, half owner of the Wrenn-Columbia Furniture Company, and a stockholder in the Southern Furniture Exposition Building. He also was president of the North State Telephone Company from 1921 until his death. He was buried in Oakwood Cemetery, High Point.

Wrenn, a Democrat, was an alderman of High Point for seven years and mayor for four, as well as a steward in the Methodist Episcopal Church, South. In 1928 he was a delegate to the Democratic National Convention in Houston, Tex. On 11 June 1918 he married Louise Clinard, a graduate of the North Carolina State Normal School. On his death she became head of the High Point Furniture Company, and in 1937 she donated the M. J. Wrenn Memorial Library to High Point College.

I just acquired a piece of

I just acquired a piece of furniture from a relative with the Wrenn Columbia Furniture Co label on it. It is a vanity and I love it!

I am the curator at the High

I am the curator at the High Point Museum. Mr. Wrenn was indeed a builder of the city of High Point. His uncle was one of the first businessmen in the city. M.J. and his brother T.F. were able to get in on the growing furniture industry in High Point from the very first. Wrenn-Columbia went out-of-business in 1934-35, around the time of Mr. Wrenn's death. High Point Furniture closed around 1950. He had also been a partner in High Point Metallic Bed Company (1900-1913). A photo of his grand home can be found on our History Pin page (https://www.historypin.org/en/person/36069/list/pins); it has been torn down.

Thank you for visiting NCpedia and taking time to share this.

May NCpedia use this image to republish in this article?

I am also replying via email.

His parent's lived very difficult lives. I'm impressed with everything Mr. Wrenn was able to accomplish. I would like to know what the situation of his furniture factory is today.