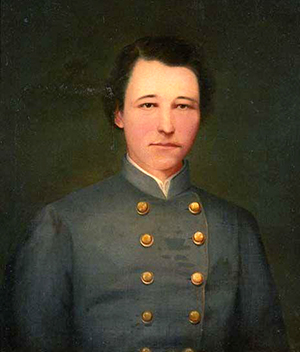 Henry Lawson Wyatt, the first Confederate soldier from North Carolina to be killed in battle during the American Civil War, was born in Richmond, Va., the son of Isham Belcher and Lucinda N. L. Wyatt. In 1856 he and his family moved to Pitt County, N.C., and eventually settled in Tarboro, Edgecombe County, where young Wyatt was apprenticed to the carpenter's trade.

On 18 Apr. 1861 he enlisted as a private soldier with the Edgecombe Guards, which had been organized earlier on the same day. Originally composed of eighty-eight privates and nine noncommissioned and four commissioned officers, the company was commanded by Colonel Daniel Harvey Hill of Mecklenburg County and became A Company of the First Regiment of North Carolina Volunteers. After North Carolina had enlisted ten regiments, the First Regiment, which had been the earliest of all North Carolina troops to organize and take the field, became known as the Bethel Regiment.

In May the First North Carolina Volunteers were ordered to Yorktown, Va. They broke camp at Richmond on 24 May and reached Yorktown that evening. Under the orders of the commanding officer, John B. Magruder, the First North Carolina marched to Big Bethel Church, thirty miles from Yorktown, and eight or nine miles from Hampton and Newport News. On 10 June, at three o'clock on a Monday morning, the First Regiment was awakened for a general advance on the enemy. The Federals, under the command of Brigadier General E. W. Prince, had approached on the road leading from Fortress Monroe and Newport News.

A number of Massachusetts troops, led by Major Theodore Winthrop, soon occupied a house on the battlefield. At the suggestion of Colonel Hill, Captain John L. Bridges asked for volunteers to burn the house. Corporal George Williams and Privates Henry L. Wyatt, Thomas Fallon, John H. Thorpe, and Robert H. Bradley of Company A offered their services. Issued matches and a hatchet, the soldiers were to charge across an open field, two hundred yards wide, in the face of the enemy's lines. Wyatt was the next to the last man to leave the breastworks. A volley was fired not from the 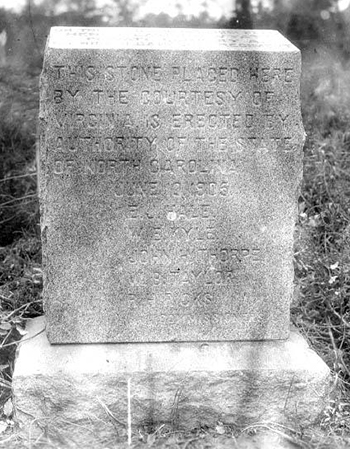 house but from a Federal company off to the left along a road. Thirty yards from the breastworks, Wyatt fell on his back with a musket ball in his brain. Three of the other men were wounded; they lay on the ground until a howitzer shell was fired on the house and the enemy was routed. After a battle of approximately two and one-half hours, the enemy retreated.

That night Wyatt was carried to Yorktown where he died, never having regained consciousness. Eighteen Federals had been killed, yet he was the only Southern soldier to lose his life during the day's fighting. On Tuesday he was taken to Richmond and buried. A board of pine inscribed with Wyatt's name, regiment, and time and place of death was put on his grave.

A marker has since been placed where Wyatt fell bearing the inscription: "On this spot, June 10th, 1861, fell Henry Lawson Wyatt, private, Co. A, First Regiment of N.C. Volunteers. This stone, placed here by the courtesy of Virginia, is erected by authority of the State of North Carolina." A camp was named for him during the war, his portrait was hung in the state library, and the Virginia and North Carolina Monument Association erected a statue, unveiled on 10 June 1905, at Bethel. On 10 June 1912 a statue of Wyatt was dedicated in Raleigh.

James C. Birdsong, Brief Sketches of the N.C. State Troops in the War between the States, app. B (1894).