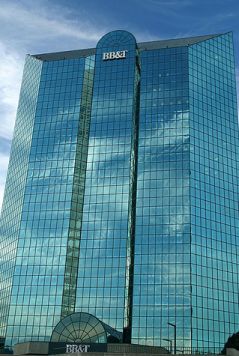 BB&T was the only bank in Wilson to survive the Great Depression. The tenure of BB&T president Herbert Dalton Bateman (1924-52) saw, among other accomplishments, the establishment of 17 branch offices throughout the state. Dramatic growth, through mergers, acquisitions, and interstate banking, took place from the 1960s into the 1990s, and by 1994 BB&T was the state's fourth-largest bank.

BB&T's 1995 "merger of equals" with Southern National Bank, based in Winston-Salem and at the time the state's fifth-largest bank, marked the beginning of the modern BB&T Corporation. Southern National had its origins in the Bank of Lumberton, founded in 1897 by Angus Wilton McLean. The acquisition of neighboring banks and expansion of branches caused the bank to change its name several times, culminating in 1963 with the name of Southern National Bank of North Carolina. By 1965 the bank had 22 offices in 13 eastern North Carolina communities, and it had moved into other business lines, such as credit cards, mortgages, and leases. Southern National's headquarters moved to Winston-Salem in 1993, although corporate headquarters and several other divisions remained in Lumberton.

Search results from the North Carolina Digital Collections search results for Wilson Banking and Trust company, including the 1989 Bill to incorporate the company, and a recommendation for it not to pass.