Burroughs Wellcome Fund (BWF) is an independent private foundation whose mission is to advance the medical sciences by supporting research and other scientific and educational activities. It was founded in

1955 in the United States as an extension of the England-based Wellcome Trust, from which it became completely independent in 1993. From its headquarters in Research Triangle Park, the fund grants about $25 million annually across the United States and Canada for biomedical sciences, the study of infectious diseases, and other scientific fields. In North Carolina, BWF grants have been particularly important in the area of science education. Among other successful efforts, BWF funds helped establish the North Carolina Science, Mathematics, and Technology Education Center, which has been instrumental in helping to strengthen science, math, and technology education in secondary schools across the state. 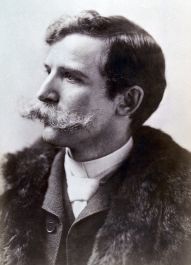 company's founders, Silas Mainville Burroughs (1846-95) and Henry Wellcome (1853-1936), were American pharmacists who traveled to England to explore a new method of medicine delivery-compressed pills. The company soon began manufacturing its own medicines and quickly established an in-house research facility, a first among pharmaceutical companies. Burroughs Wellcome opened U.S. operations in New York City in 1908 and a manufacturing facility in Tuckahoe, N.Y., in 1919. Growth considerations led the company to relocate its U.S. operations to North Carolina in 1970, building research facilities in Research Triangle Park and a manufacturing facility in Greenville.

From its creation in 1955 as an arm of the Wellcome Trust until 1993, the Burroughs Wellcome Fund operated as a corporate foundation, supporting scientific research. In 1993 the trustees made a $400 million gift to the Burroughs Wellcome Fund and gave it independence. The fund has no direct ties to the Wellcome Foundation, Ltd., or to GlaxoSmithKline, the modern incarnation of the company. In the early 2000s its assets were more than $575 million.