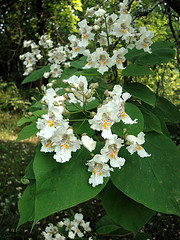 The catalpa tree in North Carolina belongs to the southern species Catalpa bignonioides, native to Georgia and Florida but thoroughly naturalized throughout the southeastern quarter of the United States. It is widely cultivated as an ornamental tree because of its rapid growth, its amenability to transplantation, its broad, heart-shaped leaves, and the abundant white and yellow spotted blossoms it produces in late May and early June. The catalpa's 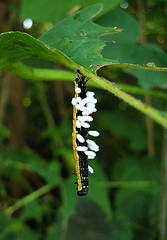 leaves, unlike those of most other trees, are reddish brown rather than light green when they first appear, turning to dark green within a month. The tree attains a maximum height of about 30 feet and produces wood useful for fence posts, though for little else.

The catalpa tree is especially valued by North Carolina fishermen for its role as host to the catalpa worm, a three-inch, green and black caterpillar that is the larval stage of a butterfly that lays its eggs on the undersides of catalpa leaves. The caterpillars reach maturity within two weeks of hatching and devour their natal leaves before burrowing into the earth around the roots for a pupal stage of about a year's duration; the tree grows new foliage at a fast rate and can produce several crops of worms in a summer. These worms are unrivaled as bait for bream, bass, and catfish, and they fetch handsome prices at country stores and bait and tackle shops during the season. In North Carolina, they are sometimes misnamed "catawba worms," as well as other imaginative spellings such as "katabo worms" and "cadawber worms."

Thank you for the very useful

Thank you for the very useful article, that included photos. Am I correct in observing that the catalpa worm in the photo is hosting eggs from a parasitic wasp? If so, what species preys on catalpa worms? Thank you in advance for the reply, particularly on an older thread.

Where can you buy catalpa

Where can you buy catalpa tree plants in the Charlotte area ?

Your best bet is to call a plant nursery in your area. They are usually helpful and knowldedgeable.