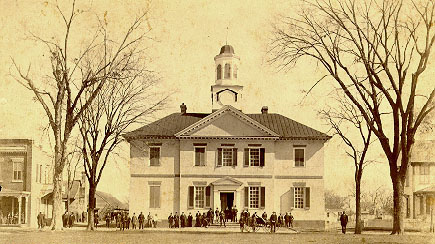 The Chowan County Courthouse was built in 1767, after the North Carolina Assembly ordered the construction of a new courthouse in Edenton to replace the deteriorating 1719 wood frame structure. The first courthouse was located on lot 5, later known as Courthouse Square or the Green, and constructed in compliance with the Assembly's order to build "a Court House to hold the Assembly in, at the fork of Queen Anne's Creek, commonly called Matchacamak Creek in Chowan Precinct."

John Hawks, architect of Tryon Palace and other public structures in the 1760s, is believed to have been the designer of the 1767 classic Georgian-style courthouse. The original design provided a large central room with adjoining offices and a semicircular apse in the rear. The upper floor housed a large paneled meeting room used by Edenton's political leaders during the American Revolution. In 1970 the Chowan County Courthouse, the finest of its kind in the South and a key attraction in the modern Historic Edenton State Historic Site, was recognized as a National Historic Landmark.