See Also: Dinner on the Grounds 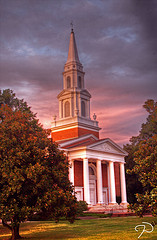 Church homecomings have been held in North Carolina since colonial times, offering people a sense of communal pride, renewal, shared history, and fellowship with other church members and with God. Quintessentially southern, they typically take place in small towns and rural regions, and they are a significant and continuing part of the religious heritage of North Carolina. Most homecomings in North Carolina are held during late August and early September, although they may be held as early as June or as late as November. They are frequently scheduled to coincide with the start of the church year.

Church homecomings almost always include two events: preaching and a communal meal. A common practice is to have a former pastor or special guest minister deliver the sermon, and occasionally, a new minister will make an inaugural presentation. Some homecomings are connected to revival services. This is the practice, for example, of Smokemont Baptist Church in an old logging community in the Great Smoky Mountains National Park. The church is used once a year in August for a weeklong revival, which culminates in a homecoming program attended by people from throughout western North Carolina. Many attendees wear period clothing and listen to "old fashioned" preaching prior to a hearty meal on Sunday.

A number of churches use homecomings as a time to remember the deceased of the past year with a memorial service. Another typical homecoming activity is to have a groundbreaking ceremony or the dedication of a new building. The First Baptist Church of Greensboro has intermittent homecomings to memorialize prominent church leaders of the past and follows the service with dinner on the grounds.

Several Quaker meetings in eastern North Carolina and the Piedmont hold homecomings that are similar to those of other denominations in the state. Some churches, such as Westover United Methodist Church in Raleigh, prefer a relaxed atmosphere for the time after dinner and make it a "time for music and memories." Mt. Pelier Presbyterian Church in Rowland has an annual daylong homecoming that includes a call for contributions to a special offering for cemetery upkeep. Such maintenance is an activity at numerous homecomings.

Hello! May I have permission

Hello! May I have permission to use the article "Church Homecomings" in my church's newsletter? We will be holding our Homecoming celebration in August, and I thought it might be nice for people to learn about the history of homecomings. Thank you!