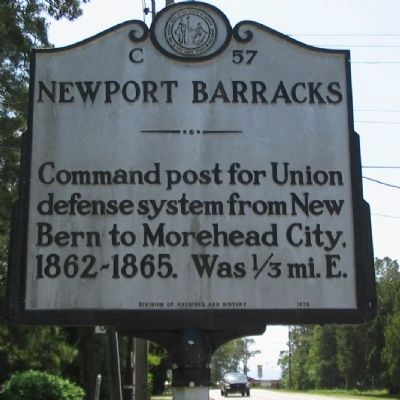 North Carolina was home to more than 100 Confederate and Union military installations during the Civil War. Dozens of camps-some serving as temporary bases and others as long-lived training facilities-were established across the state, often in close proximity to one another. Many so-called camps of instruction were created so that individuals could be passed through the muster process and supplied with uniforms and arms. Basic training was begun while the new recruits were formed into companies, battalions, batteries, and regiments. Instructors for these camps came from the cadet corps of the state's various military academies and from the ranks of professional officers formerly in the service of the United States. The most regularly recognized instruction facilities were located at Asheville, Carolina Beach, Company Shops (now Burlington), Fort Caswell (Brunswick County), Garysburg, Halifax, High Point, Kittrell, Raleigh, Ridgeway, Warrenton, and Weldon.

Many Civil War forts and batteries were built in defense of towns and other strategically important locations throughout North Carolina. These installations varied greatly in size and design and were rarely intended to be permanent. They ranged in sophistication from simple earthen mounds and felled trees to well-engineered systems of trenches, bombproof enclosures, and magazines. Only a few of the defenses that came to be called forts match the popular image of substantial stone or wood structures with massive gates, elevated walkways and firing positions, and enclosed gun emplacements. Batteries, many little more than hastily entrenched artillery units used as the outermost defense for larger forts or cities, were often named for men of local prominence or for distinguished soldiers known to the defenders.