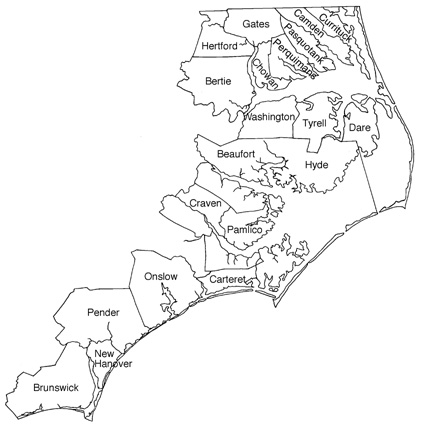 The Coastal Area Management Act was introduced in the 1973 session of the North Carolina General Assembly in response to the 1972 federal Coastal Zone Management Act, which demanded solutions to mounting problems in coastal areas. A great deal of very vocal opposition caused the bill to be held over for another term while a joint Senate-House legislative committee toured the coastal area and held public hearings on the controversial subject. The revised Coastal Area Management Act (CAMA) of 1975 gave policy-making authority to a 15-member Coastal Resources Commission (CRC), made up primarily of coastal residents nominated by local governments and appointed by the governor. Backing up the commission was a Coastal Resources Advisory Council with representation from each of the state's coastal counties and from coastal municipalities, boards of health, and councils of government.

The basic goal of CAMA was to provide a program for the protection, preservation, orderly development, and management of North Carolina's coastal resources. The law covered the 20 coastal counties between Virginia and South Carolina, the adjacent ocean waters within the limits of North Carolina's jurisdiction, the Outer Banks and other barrier islands, and the inlets, sounds, and other estuarine waters within the state.

CAMA called for immediate action in three areas. The CRC was to develop state guidelines under which each coastal county, town, or city desiring to do so was to prepare its own land-use plan, taking into special consideration the desires of the citizens as to the future of their area as well as the carrying capacity of the land and water resources to sustain the proposed growth. In developing its plan, each governmental unit was to divide its land area into five classifications: developed, transition, community, rural, and conservation. The CRC would also conduct continuing studies (and make periodic reports to the General Assembly) on the development of a better-coordinated, more unified system of environmental and land-use permits in the coastal area. Finally, the CRC was to identify all critical areas in need of protection or preservation and designate them as Areas of Environmental Concern, in which no development activity would be undertaken without a special permit.

From the beginning of the CAMA debate, the law has been considered too restrictive by most prodevelopment interests and too lenient by most environmentalists. In the first two decades after its passage, all efforts to repeal or make major amendments to CAMA failed. A specially created state Office of Coastal Management provides the staff to enforce management policies adopted by the CRC.

The twenty counties covered by CAMA. Image courtesy of the Division of Coastal Management.