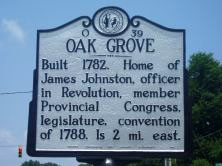 Patriot, American Revolution military leader, and public official, James Johnston was born around 1742 in Scotland.  Of Scottish ancestry, his father Henry Johnston emigrated to North Carolina to escape civil and religious conflicts raging on in England, Scotland, and Ireland. Johnston and his wife arrived to the New World and settled along the Catawba River.  They had two children, James and Mary. James married his wife, Jane Ewart, several years before the American Revolution and they settled in Tryon County, North Carolina. Together James and Jane had two children, Robert Johnston and Sarah Johnston. His son, Robert, would eventually become a North Carolina Senator from Lincoln County in 1810-1811 and again in 1817-1818. His daughter, Sarah, married a Dr. Benjamin Johnson of Virginia.

James Johnston fought as a colonel in the Patriot militia during the American Revolution. He became well-known in what was then Tryon county as a militia captain and by serving on juries. He was elected to the Provincial Congress in 1776. He appears to have entered military service sometime around 1775 when he participated in the Snow Campaign. He was given the rank of Captain by then Colonel William Graham and was sent off to area known as “Ninety-Six” district in northwestern South Carolina to fight a large number of Tories led by Fletcher and Cunningham.  After pushing back the Tory forces at Ninety-Six, Colonel Graham received news that General Griffith Rutherford had requested a large number of infantry and cavalry units from Mecklenburg, Rowan, and Tyron counties to subdue Cherokee Indians that were killing civilians on frontier settlements.  Colonel Graham, along with Captain Johnston, fought in General Rutherford’s campaign to weaken the power of the Cherokee before they could combine with the British.

After the success of this campaign, Captain Johnston was promoted to the rank of Colonel and was given a number of expeditions to the southern border of North Carolina including an expedition along the Pacolet River.  Following expeditions in North Carolina and South Carolina, General Rutherford placed Colonel Johnston under the command of Colonel Francis Locke near Mountain Creek, North Carolina.  In June of 1780 in advance of the Battle of Ramsour’s Mill, Johnston distinguished himself when he was selected to cross enemy lines to deliver a message to General Rutherford from Colonel Locke containing information about strategy for the upcoming battle.

Johnston has also been credited in a number of works  with a keen mind for strategy which he is said to have employed at the Battle of Kings Mountain. However, historians have disputed this story based on a lack of firtshand reports from others who were at Kings Mountain.  Yet his alleged participation at Kings Mountain was memorialized with the inclusion of his name on the Kings Mountain U.S. Monument at Kings Mountain National Military Park in Blacksburg, South Carolina.

Prior to the Revolutionary War, Colonel James Johnston purchased a sizeable piece of land on the Catawba River.  After the split of his home county of Tryon into Lincoln and Rutherford counties, Johnston was elected to the legilslature as a senator from Lincoln County between 1780 and 1782 and reportedly acted as a disbursing agent for the Western Division. He was also a representative at the Convention of 1788. In the few years leading up to his death, Colonel Johnston served as the Ruling Elder of his local Presbyterian Church and appears to have been a highly regarded member of the community.

James Johnston made his home at "Oak Grove", in what is present day Gaston County, in the home he built in 1782. The building was demolished in the 1950s. Johnston passed away on July 23rd, 1805 and was buried in a private cemetery at Oak Grove.

James Johnston is an uncle of

James Johnston is an uncle of mine two different ways so I am unhappy at anyone's questioning his fighting at King's Mountain. Cyrus Hunter, a brother-in-law of James Johnston's and Jane Ewart's son William, drew on family history, and praised Robert Ewart and his sons-in-law. One of the sons-in-law, my gggg grandfather Robert Knox, 90 when he applied for his pension, makes it very clear that Johnston was at King's Mountain. Grandpa Knox says he was NOT at King's Mountain because Col. (or Capt.) Johnston had sent him back for something. If you send someone back to camp to fetch something just before King's Mountain you miss the whole one-hour show and go through life lamenting that you were not at King's Mountain with the rest of your family. Be careful, please, with your high-minded skepticism.