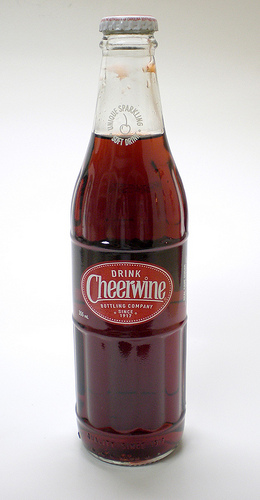 In 1913 L. D. Peeler and several other investors in Salisbury purchased stock in the Kentucky-based Mint-Cola Bottling Company, and Peeler started the local bottling franchise of the company. When the parent company went bankrupt in 1917, the Salisbury investors purchased their local branch and renamed it the Carolina Beverage Corporation. In the same year, in response to a sugar shortage during World War I, Peeler sought ways to make a cola drink with less sugar. After experimenting with different formulas, he added wild cherry flavoring to a cola to create Cheerwine. The name comes from the drink’s cherry flavor and burgundy wine color. The exact formula for Cheerwine has never been revealed, and the company that produces it is still owned and operated by Peeler descendants. The popularity of the new drink was so great that the bottling company changed its name in 1924 to the Piedmont Cheerwine Bottling Company. For many years the drink was available only in western North Carolina, where it is still enormously popular, but in 1981 the company began to expand beyond its traditional market into neighboring states. In January 2003 Cheerwine became available in Europe for the first time through a licensing agreement with a local bottling company in Norway.

In May 2017, Cheerwine celebrated its centennial anniversary.  The company held a Centennial Celebration in its hometown of Salisbury.  The company claims to be the oldest softdrink company continuously operated by the same family.  Charles Clifford ("Cliff") Ritche, great-grandson of the founder L.D. Peeler, has been the company's CEO since 1992.

whats the group that brought

whats the group that brought this peice of culture to nc

The Cheerwine website includes a brief history of the company, which you can find here:

Here are a few more articles that I hope you will find helpful:

exactly this had my whole

Please send me a list of all known Towns that were marked or embossed on the Cheerwine bottle.
Examples include
Salisbury, Charlotte, Leaksville, Rocky Mount, Longview Texas, Sanford NC
PLEASE send others that exist

Thanks for visiting NCpedia and sharing this interest.

Unfortunately, NCpedia doesn't have any additional information that would help and I am unable to put my hands on resources that would directly help.

You may want to check back with this entry to see if other visitors have added information.

Also, you may want to contact the company that bottles Cheerwine: here is their web address: https://cheerwine.com/about.

I'm sorry you didn't find this useful.  Please let us know what you were specifically looking for and we will try to help you find useful information.

Hello, I have obtained two, 8

Hello, I have obtained two, 8 sided, window pane, Cheerwine bottles from, Leaksville, Nc. from the 1920's. From what I understand this bottle is hard to come by. I was wondering, if anyone knows, any history of this particular, Cheerwine Botting Co.? I would appreciate any feedback or comments. Thank you in advance, Aron